The Wonder of Boo Boo

Quirky and fearless, this Patterdale terrier will steal your heart (or, if you aren’t careful, your stick!)

If you’ve ever been near the top of the Lykken Trail in Palm Springs and seen a dog in a reflective coat who’s not even winded, you’ve probably met Boo Boo. Or maybe you once saw a small dog with a giant piece of wood in his mouth somewhere in Oregon and wondered how he could possibly carry such a big stick. That was most likely Boo Boo, too. Or, if you’ve seen a black dog on a bike, paws firmly on the handlebars, wind in her ears—in just about any city in the country—that might also have been a Boo Boo sighting. Boo Boo is a daring dog who commands attention and makes a friend everywhere she goes, and right now she’s traveling around the country, looking for new friends and new adventures.

But home is where the heart is, and their hearts will always be in Palm Springs.

Well known around the valley for her antics and her friendly demeanor, Boo Boo already has a local group of fans who love to see what she’s up to. With her own Facebook page, www.facebook.com/booboothewonderdog, and her magnetic presence and winning smile frequently spotted around town, she’s a local celebrity.

John and his wife Leisa have been living life through Boo Boo’s eyes since they adopted this delightful little dog 13 years ago. Frequent travelers who love to run, hike and cycle, the pair found the perfect companion in this Patterdale terrier, a fairly rare English breed with only about six known breeders in the United States. 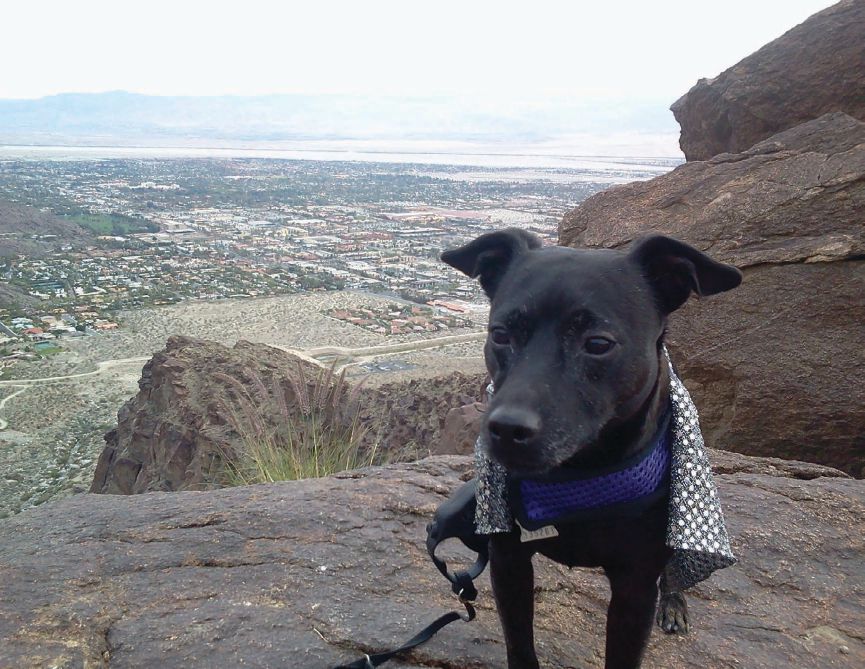 John and Leisa’s first dog was a Jack Russell, Patches, who John says loved to run. “She was a great runner,” he recalls, and she fit well into their active lifestyles. But Patches was getting older. A friend at John’s company had two Patterdale terriers, Tuff and Bitsy, and they were looking for homes for a litter of their puppies. John and Leisa decided to adopt one of those puppies, and they brought Boo Boo home to meet her big brother Patches. 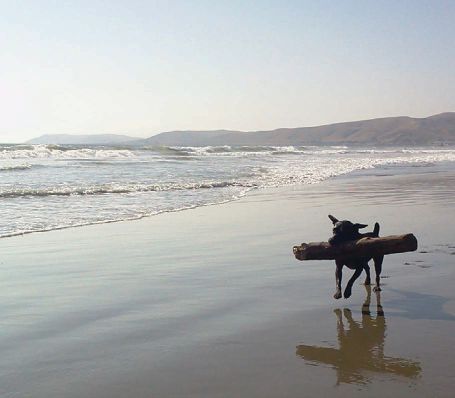 Running behind Patches, Boo Boo learned to love racing and fetching and hiking just as much as Patches did. When Boo Boo was three years old, John and Leisa lost Patches, but they found comfort in their funny little Boo Boo, who, despite her size, had a huge personality that always seemed to draw people in. John took Boo Boo to the running events he participated in with his running club, the Palm Springs-based Frontrunners. She soon became the club’s mascot, as well as a fierce competitor, frequently taking home first place medals herself—her training was rigorous, at about 12 miles a day in her prime. As hard as she worked, she expected the same from John, driving him to hit new personal bests as she pushed him hard during races. A few years back, at Boo Boo’s urging, John set a personal best at the Santa Paws 5k in Palm Springs. “She drove us both to a PB in that race,” says John, “constantly looking back at me to get me to pick up my pace.” 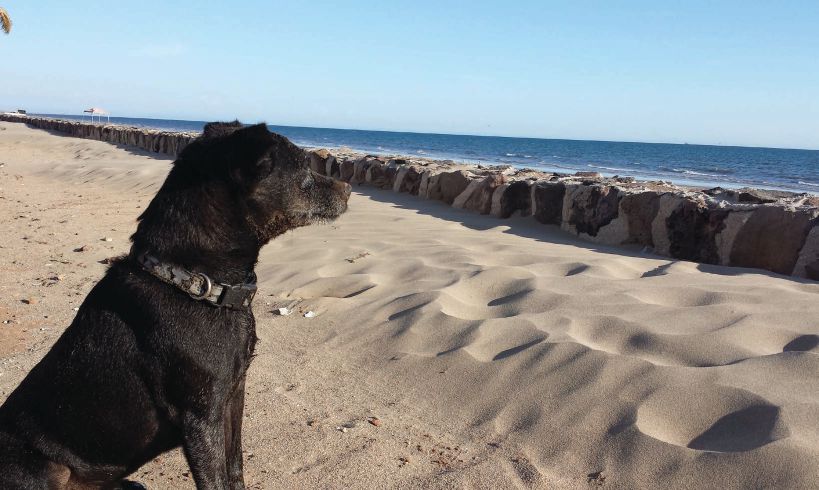 Boo Boo is famous for never meeting a stick she couldn’t fetch—and the bigger, the better. The tiny dynamo has been known to sniff out sticks three times her size and twice her weight and trot happily back with it. She’ll dive into a lake, the ocean or even the underbrush to find her perfect oversized stick. She once found a giant one on a lake in Minnesota that was so legendary that “the staff” (as John and Leisa laughingly refer to themselves) still have it today. Boo Boo’s sticks— more like small logs, actually—are the stuff of legends. 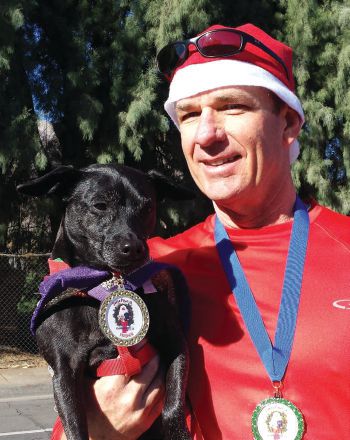 Now 13 years old, Boo Boo still loves to fetch sticks, hike, and trot around in the great outdoors. But after a hard workout, she looks forward to climbing aboard the specially designed platform on Leisa’s bike, getting buckled into her safety harness, and traversing the countryside from her spot on the handlebars. A regular rider—she and Leisa ride 10 to 12 miles a day—she’s also ridden in her harness on the handlebars of a four-wheeler in the rough desert terrain. 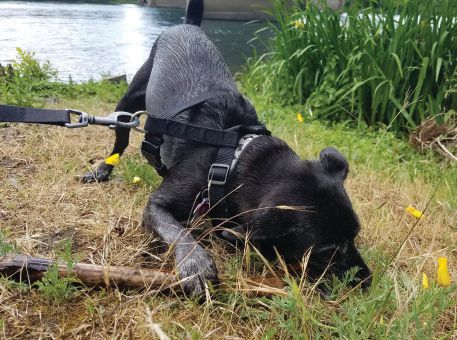 Boo Boo is not your typical dog. She’s a daredevil, a risk taker … she’s fearless. But she’s quirky, too. “She doesn’t know how to eat a steak,” laughs John. “She looks at it in confusion, then peers up at us until we cut it up for her.” Never one to beg, she’ll sit quietly in front of the most tantalizing treats until she’s given the go ahead to indulge. And she seems to like people more than she likes other dogs.

Boo Boo is always a big draw at any gathering—races, festivals, the grocery store. But she pays little attention to other dogs (except for her favorite running pal, Ginger). Anytime she goes out with her staff, people migrate to her, wanting to pet her, asking her name, and exclaiming how cute she is. “She’s mellow, not intimidating, and people are attracted to her,” explains John. And Boo Boo considers it her responsibility to make people happy—a responsibility she takes seriously. “When she knows people are enjoying her and laughing, she gets all puffed up and prancy,” he says. “She really responds to people on the street.” 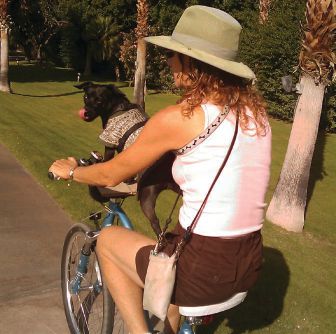 And Boo Boo herself has been captured by news cameras just being her own “person on the street.” Always civic-minded, Boo Boo has been featured in local news reports attending political rallies and supporting the CV Link (a pathway for pedestrians, bicyclists, and low-speed electric vehicles in the Coachella Valley). “Boo Boo is just standing up for what she believes in,” says John with a grin. “But the camera loves her.”

That’s true, John. Just like everyone who is lucky enough to meet her. 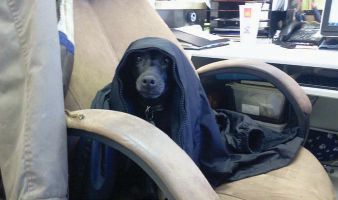 Safety Tips For Walking Your Dog