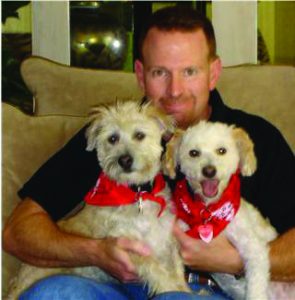 “Scruffy” was a 15 year-old Cairn Terrier-mix who, up until early June, was the official mascot of “Paws & Hearts” Animal Assisted Therapy.  “Lucky” started the organization, and a few years later, Scruffy came along. For years, Lucky and Scruffy made three weekly visits to Eisenhower Medical Center together.  The “boys” also made presentations all over the valley to health care facilities, Rotaries, service clubs, pet clubs, library reading programs, and were always at health fairs and adoption events.

Lucky passed away five years ago. Scruffy became the lead dog of the organization, visiting Eisenhower solo for well over a year while training all the incoming dogs. Soon, “Maddie” came along, and Scruffy trained her to become a therapy dog. Scruffy always had a very gentle and quiet demeanor.  Where Lucky would almost jump up on the patient and want to kiss them, Scruffy was always the Ethel Mertz of the group, a great co-star. He would hang back, settle in beside the patient and gently lick the top of the patient’s hand.  This hand kissing really became Scruffy’s trademark over 10 years of visits.  That was how Scruffy conveyed that he wanted the patient to feel better.

Scruffy was adopted at our second dog walk fundraiser.  Christine, from Pet Rescue, used to bring dogs for adoption to our events, and that year she brought Scruffy (that was the name she had given him).  What a mess he was—literally! He was a little beaten up and very scared.  Apparently, a woman driving to work one day in Indio found him tied up to some discarded furniture outside of an abandoned house.  She got him into her car and took him to Pet Rescue. Scruffy had been taken out for a walk with a few other dogs and broke away and went running down Highway 111 and the poor volunteer thought he was a goner.  The next morning when Christine came to open the shelter at 6:30 am, there was Scruffy, asleep on the stoop.  The poor guy had found his way back and slept outside all night.  Christine put him in his kennel and she said that he slept for the next two days!

When Scruffy met Lucky, magic happened.  The two boys, as they became known, hit it off immediately, and for the next nine years were inseparable.  They complimented each other beautifully. Lucky taught Scruffy how to be a therapy dog; to pick up signs the patients were giving off and how to properly respond.  Scruffy’s favorite visit days at Eisenhower were Tuesdays and Thursdays.  He started off his rounds by visiting patients in the Mental Health department. They were usually just finishing breakfast in their small dining room and Scruffy was allowed off-leash to visit the folks.  Some of them would purposefully drop a bit of scrambled egg on the floor for him, but his favorite thing was when a patient dipped their finger in the maple syrup and let him lick it off.  This was reward enough for his visits! 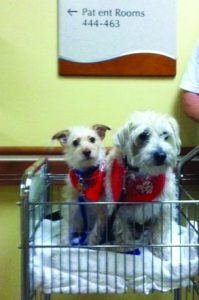 As much as Scruffy loved visiting seniors, he was totally animated when visiting children.  It didn’t matter the age, Scruffy just moved right up, face-to-face with a child.  He actually gave kisses; he would play, and let the children pet him anywhere.  He always elicited a ton of smiles and thank-you’s from children and adults alike!

At the ripe old age of 14, Scruffy was diagnosed with diabetes and a few months later, Cushing’s disease.    His visits at Eisenhower had to stop because he couldn’t do all the walking, but he took over the Wednesday morning visits at the Lucy Curci Cancer Center.  There he could sit on the ottoman, visit with the patients, dispense kisses, and in that little body of his, continue to make a huge difference.

Sadly, on June 9th it was time to say good-bye and Scruffy joined his brother Lucky at the Rainbow Bridge.  The last couple of months without Scruffy at home, at the office, or on visits have been pretty tough.  That Big Bear will be a tough act to follow.

“Miss ya, Big Bear! You were a one-in-a-million dog, and you’ve made thousands of patients smile because of your visits!  Dad was incredibly proud of you!”

Our 2016 Annual Dog Walk-Fundraiser will be held in memory of  Scruffy and will take place on Saturday, November 26th at the Westin Mission Hills Golf Resort & Spa.

Patch: Opening the Door to a Whole New World