“Kim & Brian & Lana” is a Mutual Rescue film (view film) that shares the story of a young couple that is devastated by the death of their newborn baby. Adopting Lana, a German shepherd mix, gave them an outlet for their grief and helped the couple bond again. 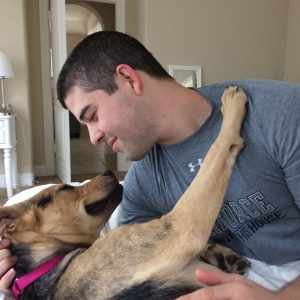 “Every day I still wake up and always think about how Aria’s not here,” says Brian, “but I think with Lana the gift she’s given me is the ability to say, ‘Being happy doesn’t erase Aria’s memory.’”

“Lana coming into our home and the way she has changed us has been nothing short of a miracle,” says Kim.

Thanks to their renewed closeness, the couple came through the worst of times and they are now celebrating another new addition to their family with the birth of their son, Noah! Brian is celebrating his first Father’s Day this year.

Kim and Brian’s story is also highlighted in “Mutual Rescue: How Adopting a Homeless Animal Can Save You, Too” (April 2019) by Carol Novello, founder of Mutual Rescue. The book features real-life stories of how adopted animals can help relieve a range of challenges – and the scientific research that proves it.