On the Go with Bow: A leisurely stroll for… more leisure

There was a Jewish dog on the loose at the Muckenthaler Cultural Center.

More on that later.

Bow was there too, on the grass outside of the center, enjoying our picnic. The northwest side of the Muck property is framed by homes of all architectural styles, including Tudor, and there are great views of the sun setting over Fullerton Municipal Airport. It’s not a dog park, so keep your dog leashed.

Bow prefers to play fetch, but she’s content with the consolation of splaying in the grass, connected via long leash to her humans, who choose to sit on blankets. The spread: lemonade, chickpea salad sandwiches, hard cheese, grapes, shelled walnuts and loquats (a favorite fruit). Plus, a cow’s ear for Bow.

We live about a mile from the former mansion at 1201 W. Malvern Ave. in Fullerton that’s now a hub for the arts, so we stroll there, lounge, gnosh and walk back home. We picnic for about 45 minutes, or roughly the time it takes Bow to finish her snacks.

Recently, I saw a commercial for Corona beer that stars Snoop Dogg and Andy Samberg. They’re sitting in lounge chairs on an empty beach, brews chilling in an ice bucket, when Andy pulls out his cellphone. Snoop grabs the phone and, literally, puts it on ice. “The best plans are no plans,” he says.

That’s what we did with our gadgets, but metaphorically.

It’s something we learn from our dogs, no pun intended: it’s OK to relax and be present.

But about that loose pooch.

The play “The Jewish Dog” was showing at the Muckenthaler’s outdoor theater (the last date was April 28). It’s about World War II as seen by Cyrus, an unusually sensitive and insightful dog from a Jewish family. Based on the novel by Asher Kravitz, the showing was in honor of Holocaust Remembrance Day.

“The Jewish Dog,” produced by the Electric Company Theater, is getting thumbs-up reviews. For more information, visit electriccompanytheater.org.

We stayed a good ways from the stage, though, because Bow can be vocal.

She barks for reasons known and unknown.

Previous articleBreaking the Mold: Meet 3DPets
Next articleAngela Adan: Here for the Pets 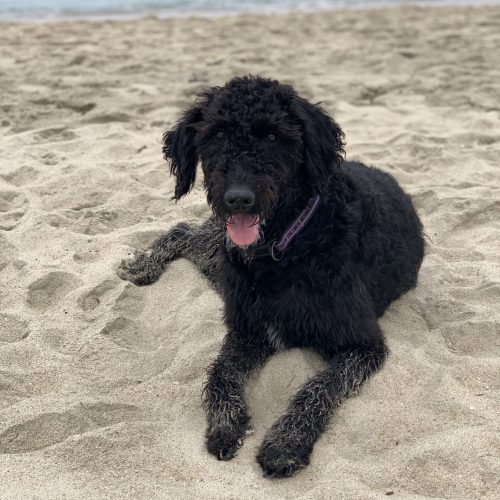