If there was ever an accidental Instagram star, it’s Tuna—as in Tuna Melts My Heart, the hilariously adorable rescue pup with a pronounced overbite. Tuna has 1.9 million followers on Instagram, and more than 2 million across all his social media web sites. Wherever he goes, everyone wants to get a glimpse, take a photo, pet and hold the little red chiweenie that bears an uncanny resemblance to the animated Mr. Burns of *The Simpsons* fame.

In fact, that’s where the name Tuna began— it was an admittedly unusual evolution. Owner Courtney Dasher’s first thought was of Mr. Burns, then, in tribute to his cartoon-like features, she started calling him Tooney. Her six-yearold nephew mistakenly thought she was saying “Tuna,” and, ultimately, the name stuck. And his full Instagram moniker, Tuna Melts My Heart, is appropriate, because Courtney says her “heart puddled” when she saw him. 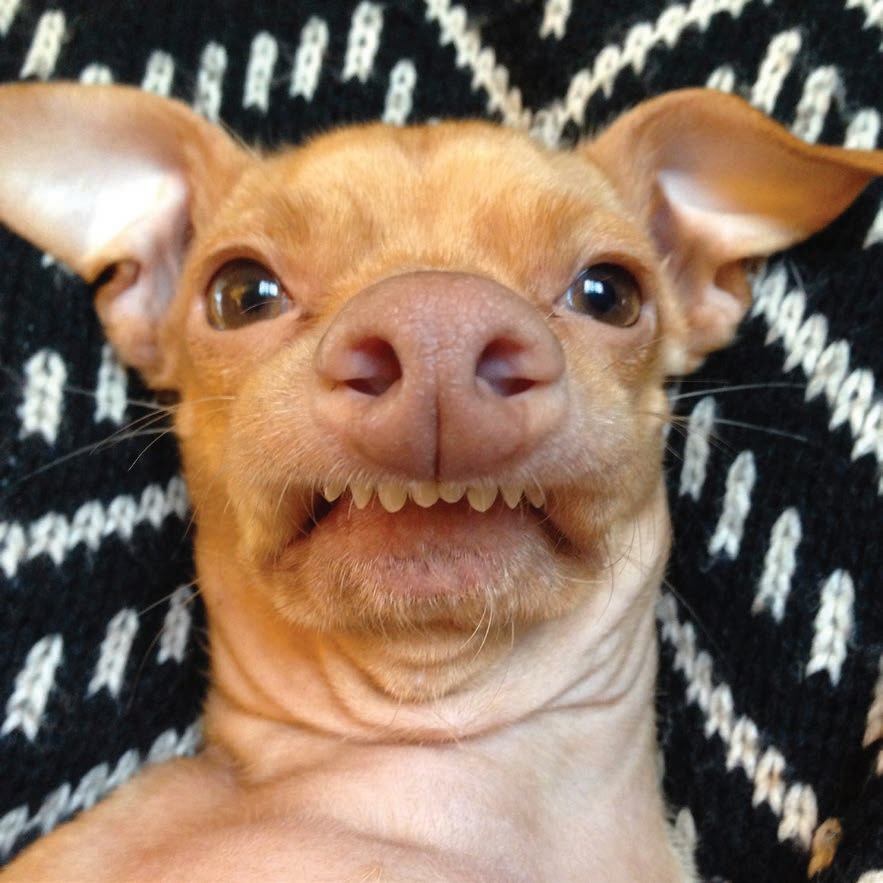 Today, Tuna is an original among the growing number of celebrity dogs on social media. But Tuna is a dog who gives back. He’s a big supporter of Best Friends Animal Society’s No Kill LA effort, using his fame to promote the cause and even donating a portion of the proceeds from his popular Tuna-branded products: T-shirts, mugs, and the best-selling “colindar,” a 12-month calendar showcasing some of Tuna’s best photos (named for his favorite toy, Colin). He’s been on what was called the Tuna Tour, visiting eight different city shelters around the Southeastern United States to raise awareness and donations for animal rescues. His book, *Tuna Melts My Heart: The Underdog With the Overbite*, was published in the U.S., UK, Czech Republic, Slovakia and Russia. When the book came out in the UK, Courtney flew across the pond with Tuna to promote it. You see, Tuna has a real connection to the UK—he shares the same birthday as J.K. Rowling and Harry Potter: July 31st. And he looks great in Harry’s signature glasses. 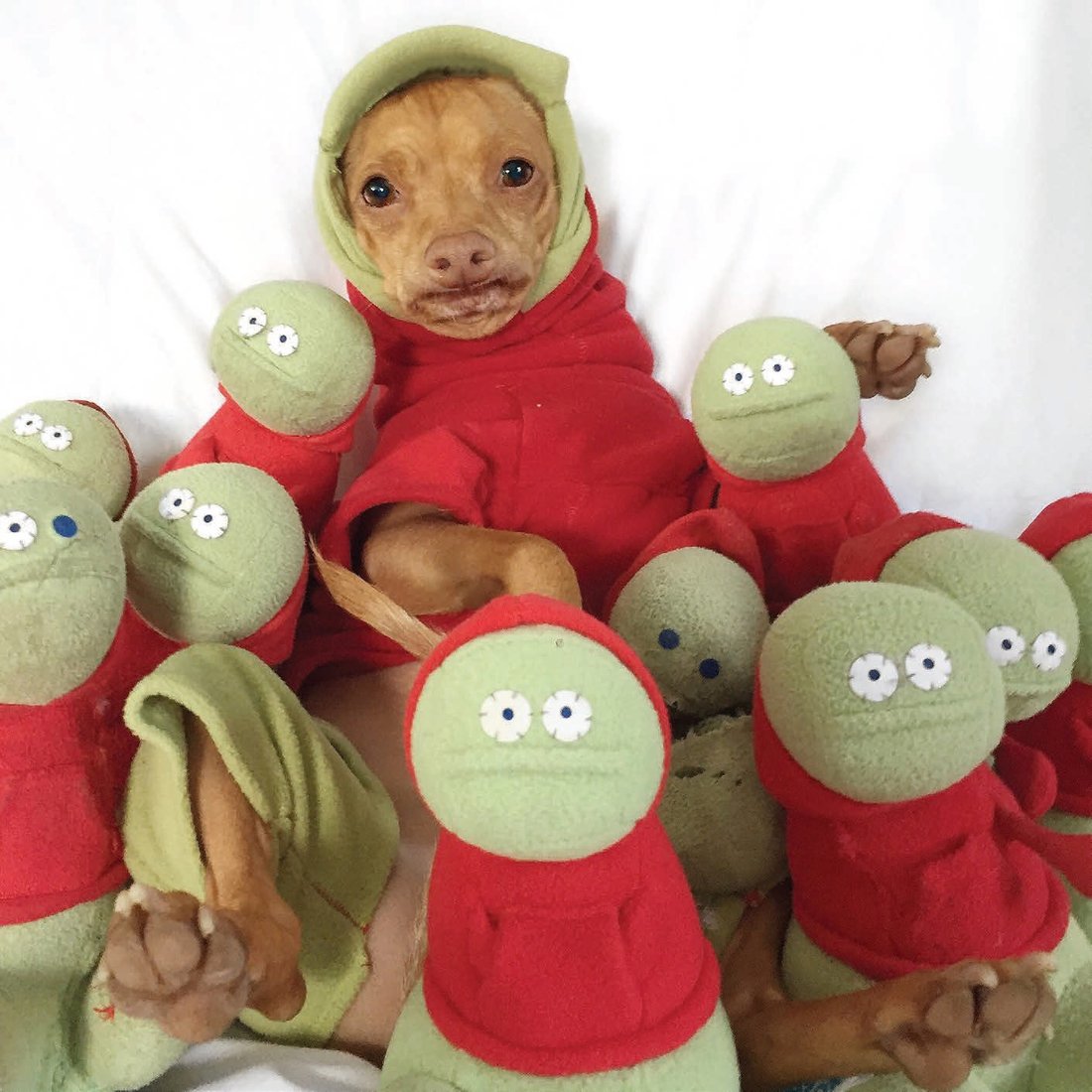 Tuna’s fans are loyal and, in some cases, even obsessed. Courtney has heard from people who’ve had Tuna’s face tattooed on their bodies. Cancer patients have told her that Tuna’s photos have helped them endure chemo- therapy. And what she hears most often is that Tuna brings joy to his fans’ lives, gives them a laugh, and warms their hearts. And that, Courtney says, is exactly why she decided to share Tuna with others through Instagram.

So how did this little dog become such a star, with fans around the world? Purely by accident. Tuna is seven now, but in 2010, when Courtney met him, he was just 4 months old. He’d been abandoned on the side of the road in San Diego and ended up at a rescue in Los Angeles. Courtney had been considering fostering a dog when she spotted Tuna at a dog adoption event at a Los Angeles farmer’s market. “He didn’t have any of his teeth and he looked really insecure when I first saw him,” says Courtney. “He was sharing his cage with two other dogs.” When Courtney heard he was being shown for adoption by a private rescuer, she felt moved to take him home. Because she had plans to visit family up north in a few days, the rescuer told her she could take him home that day, but she’d have to return him before leaving town. “The night before I was leaving for my trip, Tuna slept on my shoulder. When I woke up, he was in the exact same position. I felt like he was telling me, ‘I want you to be my mom.’” 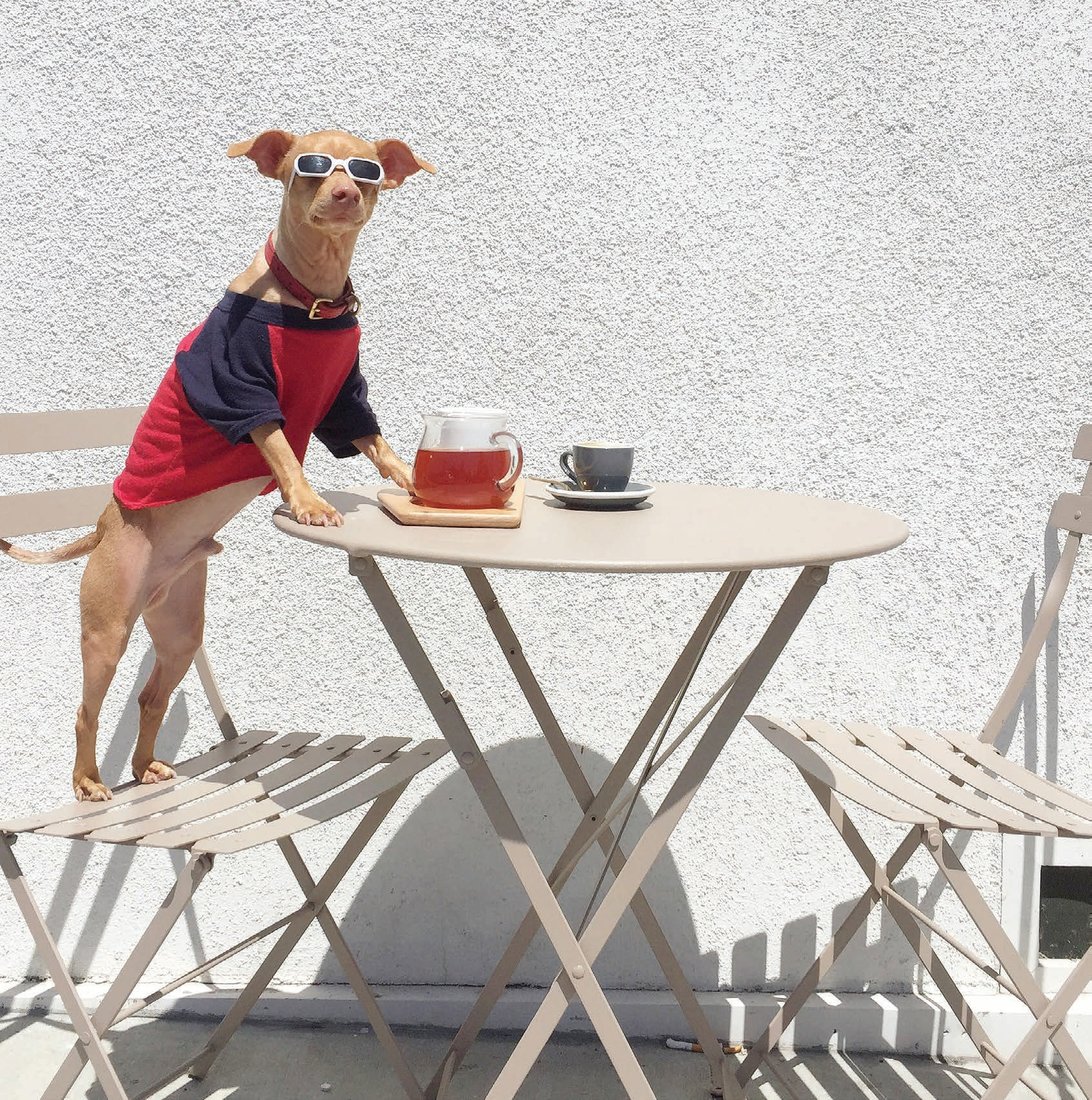 Ultimately the toothless puppy won Courtney’s heart and it wasn’t long before she adopted him and welcomed him into his forever home. After about a month, Tuna’s teeth grew in, and waking up one morning next to him, Courtney noticed how prominently his new teeth were sticking out as he slept. She laughed and snapped a few photos, and that, she says, “is when I knew he had something special.”

Courtney says she spent her first year with Tuna collecting cute photos of him on her phone, “a lot of them his funny faces.” Although she knew little about social media and had no accounts of her own at that time, she decided to set up an Instagram account for Tuna. “I was the least likely person to set up a social media account,” she remembers. But she wanted to share her funny little guy with others, so she opened an account in his name and started posting. Within a year, Tuna had 8,500 followers.

Then it happened. Someone picked up a photo of Tuna and anonymously posted a meme on the web site Reddit with the caption, “Thquirrel!” That meme went viral on Reddit, caught the attention of the Instagram account manager, and photos of Tuna were quickly featured on Instagram’s own page. “I didn’t even know Instagram had its own page! All of a sudden, he went from 8,500 followers to 16,000 in 30 minutes. In 12 hours, he was up to 34,000,” reports Courtney. “So I give credit to Instagram, because when they featured him, that’s what gave him a lot of exposure.”

Follow that with a hilarious YouTube video of Tuna trying to walk with booties on (it’s been viewed 83,000 times) and the launch of a web site showcasing all the media attention and press Tuna has received, as well as an online shop for purchasing Tuna-themed merchandise. The day after the web site launched, the tech news blog Mashable published an article about Tuna and shortly after, Darling Media’s blog for women posted Courtney’s account of how she adopted Tuna.

And his fame has grown exponentially from there, with fans around the globe. Courtney and Tuna make appearances all across the United States in support of animal rescues and related causes. They charge no fee for these appearances, and proceeds from merchandise sales are usually split 50/50 with the rescue organization. “I like giving to smaller rescues, because they need the most help,” explains Courtney. “Before I adopted Tuna, I really knew nothing about fostering, animal rescues, or the expense involved in sheltering and finding homes for these animals.” At some events, attendees will bring donations, such as pet food, blankets, toys—all the things that shelters so desperately need.

Lately, Courtney has been keeping fans up to date on Tuna’s activities through his blog, The Traveling Tuna. Sharing their search for and experiences with pet-friendly hotels, Tuna and Courtney highlight the best features of some of the most pet-friendly hotels they’ve stayed in. “For the past few years, Tuna and I have had many amazing opportunities to travel throughout the U.S. and the UK for appearances, book signings and much needed holidays,” Courtney reveals. “Along the way, we’ve been invited to stay at some of the most incredibly beautiful, pet-friendly hotels and properties within those territories.”

An interior designer by trade, Courtney recognizes and appreciates interiors that are designed with excellence, “so the site is dedicated to featuring some of my favorite #petfriendly, #tunapproved hotels, and their fabulous designs!”

With all the travel, adoration and celebrity that Tuna enjoys, you might think that it’s all gone to his head— that he lives a pampered, privileged life. Not so, says Courtney. “I don’t treat Tuna any differently now that he’s famous. I don’t feed him fancy food or pamper him any more than I otherwise would. But I am more protective of him now. If something happens to him, that would be devastating, not just to me but to millions of people.”

So what is Tuna really like when he’s not on display? “Tuna has two personalities: He’s a second grade little boy who likes to be active, mischievous and playful. But he’s also an 87-yearold grandpa who likes to sleep, all day and he’s cranky if you try to wake him up,” admits Courtney.

“Honestly, he spends most of his time in bed!” 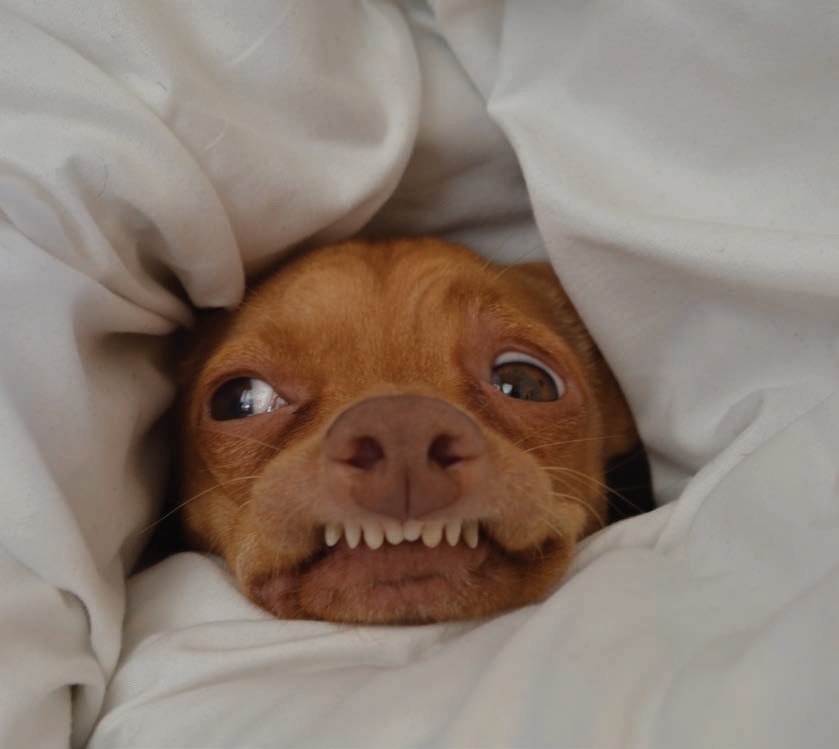 With Tuna’s dedication to satisfying his fans and raising awareness for shelters, it’s no wonder he grabs a nap whenever he can. He’s a hard-working dog who gives back so other dogs can have a better life and he brings smiles to faces all over the world every single day. If he wants a nap, you’d better believe he’s earned it.

The Rockets Red Glare Can Cause A Big Scare