Does Your Dog Know Where Home Is?

So, what do you think? Does your dog know where home is? The answer is both yes and no.

I hear dog owners say all the time that they walk their dog the same way every day, just in case the dog ever gets out, so it will know how to get back home. There is logic to that, but if your dog becomes frightened, it may run for miles without stopping—one thing after another continually scares the dog, keeping it in that blinding, panicked state of mind. When the dog finally finds a place it feels safe, it could be miles away from its own neighborhood. Even if it isn’t miles away, your dog may stay hidden for a while until things quiet down and the dog feels it’s safe to come out.

If you’re worried about your dog getting lost, there are some things you can do to better the odds that your dog will make it home safely. The most important thing you can do to help your dog is socialize, socialize, socialize. A dog that has been exposed to different sights and sounds won’t be easily spooked by the normal hustle and bustle of the outside world. If they aren’t spooked, they will have a calm and open mind, and the scents the dog passes through each day will actually be memorized by the dog’s brain, much like a computer. Then when the dog goes back home, it will re-read the scent trail back home. Dogs in a fearful state are literally running blind—their brain is spinning out of control and is not open to memorizing those scents.

I also hear people saying they make their dogs stop at the corners and sit; again, in the hope that if the dog gets out, it will know to cross the street at the corners and watch for traffic. This “safety” theory may sound logical to a human, but it’s been proven untrue and here’s why. About 15 years ago, a study was conducted on how dogs cross streets. Researchers put a camera on several dogs and let them loose in a controlled neighborhood. Every dog, including the ones that were trained to stop and sit at corners, all crossed in the middle of the street. Why? Because, in the middle of the street, traffic is only traveling in two directions. At corners, traffic is moving in four different directions, and it was much harder for the dogs to detect the movement of the traffic and find a safe moment to cross. It makes perfect sense when you look at it from a dog’s point of view, right? 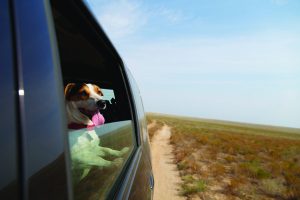 You can help your dog get to know its environment—the neighborhood, the town, or the city it lives in—by driving around with the windows down a little, so the dog can pick up on the scents as you travel. As you move through the area, the dog is familiarizing itself to these scents and, again, storing them away in the brain.

When I lived in Santa Cruz, I would visit my mother in Sacramento, a three-hour drive, all freeway travel. My dogs always had the same, telltale response a couple of exits before the one leading to my mother’s house. They knew we were getting close, and their only clue was the scent of the area. The scent cued their response, literally waking them up from sleep and making them very excited to see their grandma.

Some people believe animals have a sixth sense and that if they’re lost in an unfamiliar area, you can actually guide the dog back to you by visualizing the way home. That may sound crazy to you, and whether animals really have this sixth sense remains unproven, but I can tell you it once worked for me. My cat went missing after we moved to a new place and was gone for three days. I was reading a book on the psychic ability of animals, and a chapter on lost animals recommended that I picture the way home in my mind, so I did. You can call it a coincidence, but my cat came home the next day, exactly the way I’d pictured. We may never prove the existence of animal psychic ability, but I was certainly delighted to see my cat again and it made a believer out of me.

What we do know for sure is that a dog’s nose is an amazing thing, and it can track him back across the country if need be. We’ve all heard those stories, and it’s happened too many times to dispute it. So use that nose to keep your dog safe by helping him learn where home is.

Walk your dog in several different directions away from your house so he learns the scents associated with different pathways home. (He’ll thank you for the change in routine, too.) When driving with your dog, crack the window a little to allow scents to come in, so he gets familiar with scents further away from your home. Take your dog to obedience training so he is less likely to escape in the first place. Finally—and most importantly—socialize your dog, exposing him to as many sights and sounds as you can so he will be a calm, confident dog in any environment.

Valerie Masi, owner of Best Paw Forward, can be reached at 760-885-9450
or visit www.bestpawforwarddogtraining.com.

What is Collaborative Horsemanship?