Getting to Know Your Neighborhood Ticks 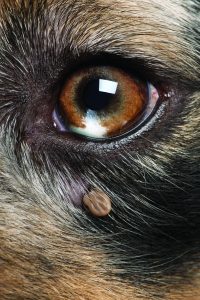 I suppose beauty is in the eye of the beholder, but for most of us, ticks are not the most lovable creatures on earth. They crawl around on our dogs’ bodies (and our own); they dig into their skin and feed on their blood, sometimes swelling to grotesque proportions. And, perhaps most disturbingly, they transmit diseases. These characteristics put them right up there with leeches and mosquitoes in the category of things we don’t want touching us.

Yet, although it is with grudging admiration, I have to acknowledge that they are pretty successful at what they do. The world has over 850 species of ticks. Mammals, birds, reptiles, even amphibians can be targets of their malice, and usually more than one animal is impacted by a single tick during its lifetime. Their ability to parasitize multiple animals is part of a complex and fascinating life cycle that is worth understanding, as it explains a lot about how and where dogs (and other animals) come into contact with ticks, as well as what the consequences of that contact might be.

The Life Cycle of Ticks

Most ticks (including all the ones in our area) go through four life stages:

Stage 1: Eggs
After mating a female tick will lay thousands of eggs on the ground, where they hatch after anywhere from a few weeks to a few months, depending on environmental conditions, to become…

Stage 2: Larvae
Larvae are sometimes referred to as “seed ticks”. They are very small, like the head of a pin, and may be difficult to see. Like all subsequent stages, larvae have to find a blood source to feed on before they can move to the next stage. They accomplish this feat by moving as high as they can onto vegetation or plant debris, extending their legs, and waiting for an animal to brush by, so they can grab on to it. The process is called “questing”, and during questing, ticks may respond to several environmental cues, such as light, shadow, color, carbon dioxide levels, and maybe even smells to help them find the ideal location to reach out and touch someone.
Because larvae are so small, they usually don’t make it very far from the ground, so their host (host number 1) is typically something small, like a mouse or a lizard. After attaching to the host and feeding for a few days, larvae drop to the ground, and then after a few weeks molt and develop into…

Stage 3: Nymphs
Nymphs look like smaller versions of adult ticks. Like larvae, they have to feed on blood before they can really accomplish anything, so they must repeat the questing process. Since they are bigger than larvae, they tend to climb further from the ground and can usually latch on to slightly larger animals, like rabbits, birds, or raccoons, although nymphs can certainly end up on dogs, or even people. Again, after feeding for several days, nymphs drop off their host (host number 2) and, following a few weeks to a few months on the ground, molt and become…

Stage 4: Adults
Adults are the version we usually envision when we think of ticks. They are the only ones capable of reproducing and the ones (primarily the females) that become noticeably engorged during feeding. Adult ticks go through the same questing process, but generally from an even higher position, usually tall grass or low shrubs, to reach larger animals, like deer, dogs and humans. After finding a host (host number 3) the adults may wander around for a while looking for the ideal location to attach. This is the time we sometimes spot them on dogs. Once they become attached they are a little harder to see, and their saliva acts as an anesthetic, so the host is unaware of their presence. If left undisturbed they may stay attached for up to two weeks, and it may be a little disconcerting to know that they breed while on the host, but only after they have fed. After breeding, the male dies, the female drops to the ground, deposits her eggs, and also dies, completing the cycle.

Because ticks in each stage can survive months on the ground without feeding, the length of the total process can be hard to predict, but it would take a minimum of two months, and maybe as much as three years. However, since environmental factors, like temperature, humidity, and rainfall can influence tick development, we see a strong seasonality in the number of ticks reaching the point of questing, which correlates directly with the risk of tick exposure to our dogs. In our area we tend to see the greatest tick activity in April, May and June, then again in October and November. It seems sensible, therefore, that during those months dog owners should be especially vigilant and remember to check carefully for ticks anytime a dog has visited an area with low vegetation or plant litter on the ground. An area frequently visited can be checked for ticks by brushing a rough, light-colored cloth over the vegetation to see if it picks up any hitchhikers.

In addition to helping us predict tick population variances, knowing the life cycle also allows us to see why ticks are so effective at transmitting diseases. Each host has the potential to pass an infection through the blood to any stage tick, which is subsequently carried to the next host and transmitted from the tick in its saliva. At least one disease organism is even known to pass through the eggs from one generation of ticks to the next. The Table presented illustrates some possible disease risks from ticks found in our area.

As alarming as this information may seem, it could be worse. We are lucky that the environment of the Coachella Valley doesn’t favor a lot of ticks. As far as we know, there are only three species we might encounter here.

The Western Black-Legged Tick (Ixodes pacificus) is not known to inhabit the lower elevations of the Valley, but is present in the San Bernardino and San Jacinto Mountains around us. These ticks are known carriers of Lyme disease and Anaplasmosis, but fortunately, no ticks in our area have ever tested positive for either disease.

The American Dog Tick (Dermacentor variabilis) is not native to the Desert, but apparently in some specific, localized areas where moisture, vegetation, and wildlife conditions are just right, it is able to survive. This is the tick a dog in the lower Valley is most likely to encounter outdoors, but only if it stumbles upon one of those isolated pockets. This species has the potential to carry Rocky Mountain Spotted Fever (RMSF) and Tularemia, but neither disease has been confirmed in ticks from our area.

The Brown Dog Tick (Rhipicephalus sanguineus) can be found anywhere dogs live. Its life cycle is very closely associated with dogs, and while it may feed on other mammals, dogs are the preferred host for every stage in its life. Most of the time each host is a different dog with the tick dropping off between stages, so the potential for disease transmission between dogs is high. It can also transmit RMSF, as well as Ehrlichiosis and Babesiosis. None of these diseases has been associated with ticks from the Coachella Valley, but the agents of both Babesiosis and RMSF have been reported in ticks from other California desert areas.
Unlike the other two species, this tick does not survive well in outdoor environments, but is extremely successful in indoor environments, such as kennels, where dogs are regularly housed. All of its life stages thrive in crevices and wall spaces of buildings. It is the only species likely to infest a home, and although brown dog ticks always prefer dogs, they will readily attach to people in such situations.

While there is not much to love about ticks, they are formidable adversaries and worthy of our respect. But the danger they present is manageable for dog owners who understand them, know how to avoid them, and who exercise common sense, a little caution, and some communication with their veterinarian. There are some great new products available that make tick prevention easier than it has ever been before. They can’t make ticks any less disgusting, but they make sharing the world with them a little less challenging.

How Wet Should I Get My Pet?