Searching for Fun with your Dog

In 2016, my golden retriever Apple was three years old, and we were taking agility classes in preparation for competing in agility trials. At that time, I was a newcomer to canine sports and had never competed in any sport in my entire life. At an agility class, a classmate told me about an introduction to nose work course that was about to start. I had never heard of nose work but decided to give the course a try. 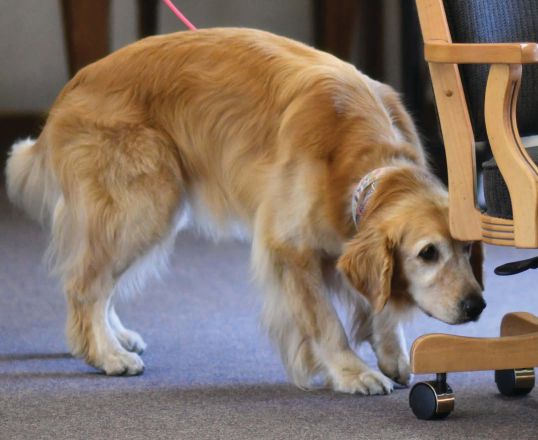 At the first class, the instructor explained that nose work as a sport is similar to the work bomb detection dogs do, without the risk of a bomb exploding, of course. The introductory class began with the dogs searching for treats. Early searches were done with a treat placed in one of several clean paint buckets arranged in a line. The bucket with the treat was moved to different positions to teach the dogs to search for the treats.

Soon the searches advanced to treats placed in buckets clipped to and hanging from an exercise pen. It was at this point that I discovered that Apple had some confidence challenges. She knew where the treats were, she wanted the treats, but the fact that the hanging buckets swayed when she went for the treat challenged her confidence and she would back away. I consider learning about this confidence issue a fortunate discovery, as I have since incorporated multiple lessons into my training that help build Apple’s confidence. One tool I used to help her overcome her fear of the moving buckets was to serve all her meals in a similar hanging bucket until she became comfortable with the movement. 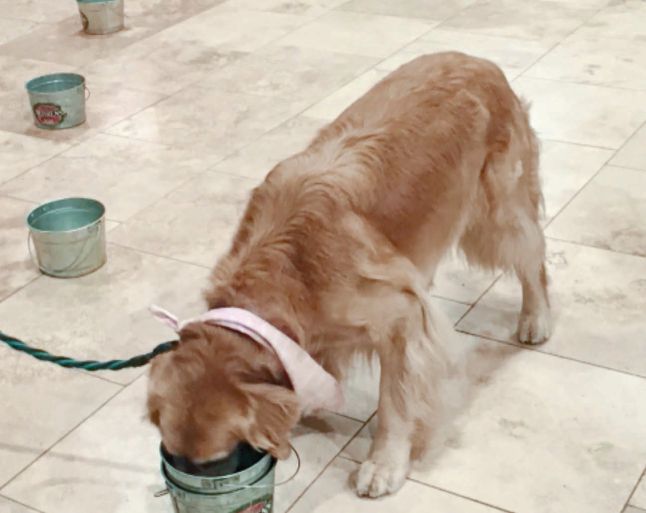 Other introductory searches done with treats involved building large mazes with exercise pens and other objects that required the dogs to problem solve and figure out a way to get to the treats. Successfully navigating these mazes are another training challenge that help improve a dog’s confidence.

Once the dogs were comfortable searching for treats, the dogs were taught to search for a particular odor (a drop or two of essential oil on a cotton swab placed in a tin or other vessel). Because it is important that nose work dogs have a positive association with odors, I think it is best to introduce odor training under the supervision of a qualified nose work instructor. 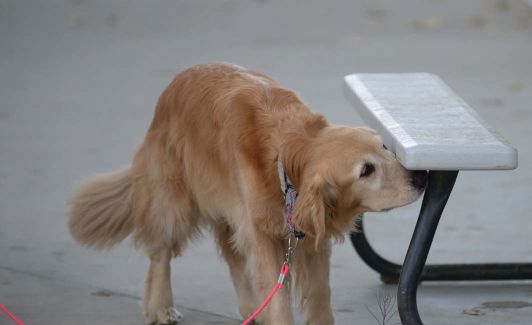 Once a dog has been trained to search for odors, the nose work fun begins! While some handlers prefer to test their dog’s skills only through classes, I enjoy entering trials, which are sponsored tests that result in various levels of certification. In Southern California, there are two organizations that host nose work trials. The first, the National Association of Canine Scent Work (NACSW), is the organization that developed nose work as a sport in 2009. The other is the American Kennel Club (AKC), which began hosting scent work trials in 2017. I enjoy competing in both NACSW and AKC trials. At a nose work trial, an odor will be hidden in search areas, and the dog has to find the odor and communicate the find to the handler, who then will call “alert.” False alerts (calling alert in a location where there is no odors) are penalized. 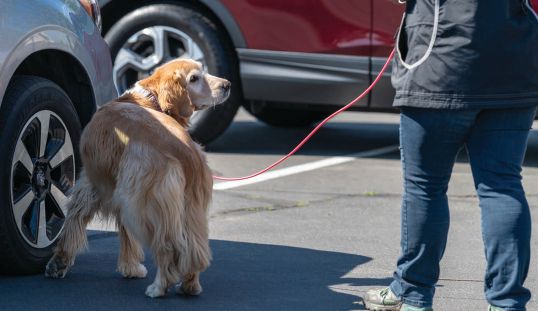 While the NACSW and AKC trial experiences are similar, they do have their differences. One difference at the outset is that NACSW requires dogs to pass an Odor Recognition Test (ORT) for the odors used in NACSW (anise, birch and clove) before the dog can enter a trial. AKC has no such requirement. There are also some differences in the areas searched during trials. At NACSW trials, dogs search interiors, exteriors, containers, and vehicles. At AKC trials, dogs search interiors, exteriors, containers, and buried (containers with vessels buried in sand or beneath water). AKC and NACSW trials also differ in the strength of the odor and the odors used. Both AKC and NACSW have multiple titling opportunities, with each level presenting increasingly difficult challenges. In NACSW, the progression after ORT is NW1, NW2, NW3, Elite, and Summit. In AKC, the title progression is Novice, Advanced, Excellent, Master, and Detective.

It’s now been more than five years since we took that first nose work class, and I’m still taking nose work classes and learning with Apple. Through nose work training, Apple has become much more confident, and I have become a much more knowledgeable dog handler. In January, Apple earned her first NACSW NW3 title. From the time I began my role as a nose work handler, I’d heard about the challenges of NW3 trials—I was not convinced we’d ever be able to reach the goal of earning that title. At the NW3-level trials, there are six search areas. The number of hides in each search is unknown to the handler and could be zero, one, two, or three. Not knowing how many hides are in a search area (or if any hides have even been placed in a particular search area) is what makes NW3 trials challenging. It is also what makes the trials most like the challenges faced by working detection dogs. Having earned one NACSW NW3 title, I now hope Apple and I can do that two more times to reach our goal of earning an NW3 Elite title.

HOW TO GET STARTED IN NOSE WORK

Nose work is a great sport for dogs and handlers. These are some of the benefits: 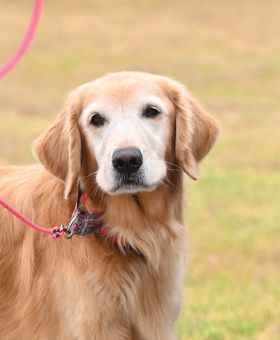 ■ Teaches your dog that they have a “job”—an outlet for their energy—which often reduces destructive behavior at home.

■ Stimulates your dog’s brain and uses up a lot of dog energy. Nose work is very cerebral, and that is physically exhausting for dogs. Apple is much more tired after a nose work class than after an agility class.

■ Offers a supportive community of dog handlers who will become your friends.

■ It’s open to all. Dogs of all sizes and breeds can succeed in nose work, and nose work trials welcome dogs of any breed, including mixed breeds. And I’ve even been in class with a blind dog. Dogs and handlers of all ages can do nose work, and it doesn’t require a lot of specialized equipment. 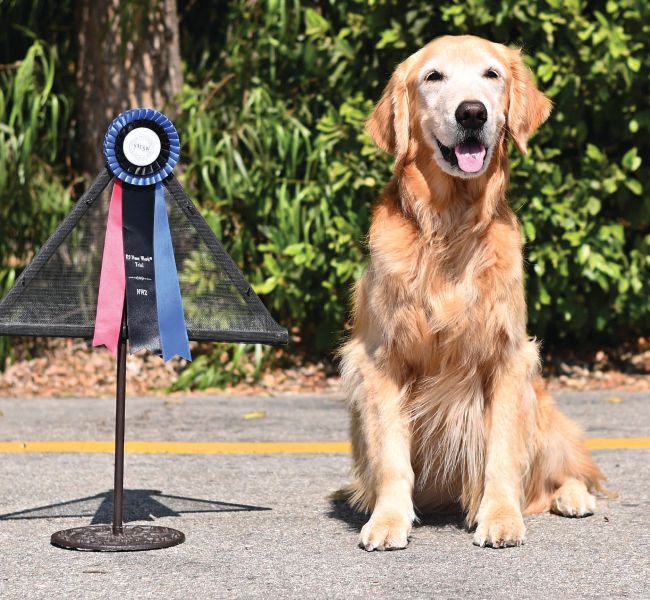 Previous articleOn the Go with Bow:
Next articleDoes Your Dog Need Help With Impulse Control ?

Put Your Dog in His Place