Working Cats — Service With a Purpose

As many as 3 million feral cats roam the streets of Los Angeles County, according to the website LAWeekly.com. Most of these feral cats originated from unneutured strays, former pet cats who were lost or abandoned and forced to live on the streets. These cats breed, and as they have less and less contact with humans, they ultimately become feral—avoiding people and possibly even showing aggression to avoid being touched. Homeless, hungry, and vulnerable, they form colonies, often with a “queen,” and always centered around food sources like dumpsters, trash cans, or drop-off points where caregivers provide the colony regular meals. Left unsterilized, feral cats breed and their numbers increase exponentially.

Various organizations, such as Voice for the Animals (VFTA), founded in 1999, participate in Trap-Neuter-Return (TNR) programs—a compassionate choice that allows the cats to continue living outdoors with their colony mates, rather than trying to force them to exist indoors or, worse, in a cage. VFTA maintains several sterilized feral colonies around Los Angeles through their thriving TNR program. But VFTA Founder and Executive Director Melya Kaplan realized the value of putting these cats to work, serving the public in a way that only they can. 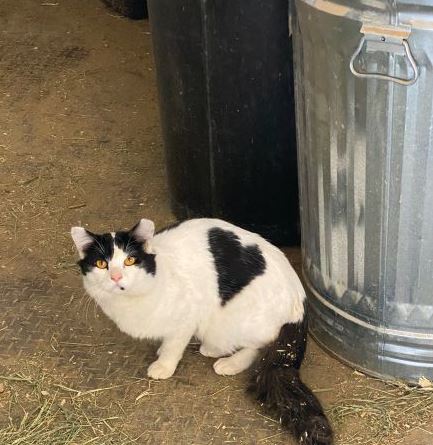 It started at the historic, original Los Angeles Flower Market, where operators and vendors were desperate for a solution to their very serious rat problem. The market’s operators and vendors were concerned they might have to close as the rats’ presence began keeping customers away. The extermination methods they were using began making people sick and did little to deter the rats. Melya brought in some good candidates from VFTA’s cat colonies and gave them sufficient time to acclimate to the location, an important step in the process that usually takes about a month. “You can’t just take feral cats and put them in one location and expect them to stay,” she says. “A feral cat will kill himself trying to get back to his old location.” Once acclimated, the cats settled very naturally into their work—“They prowl, they eat, they sit in the sun,” said Melya. Great work if you can get it, as the cats generally don’t even get the chance to kill the rats and mice—they do nothing more than leave their scent, and the rodents head for the hills, in search of safer territory.

In 2012, when the Mid-Wilshire District of the Los Angeles Police Department (LAPD) was having trouble controlling an infestation of mice and rats with traps, Melya stepped in to suggest a new approach. Commander Kirk Albanese, a caption at the Wilshire station at the time, said, “I learned about the Working Cats Program, so we gave it a try.” Melya installed cats on the station grounds, and Albanese reported, “Once we got the cats, problem solved. I think it’s a very humane way to deal with a very stubborn problem.” The approach has since been extended to several other districts, with similar success. “I’ve never seen a place it didn’t work,” said Melya.

In late 2018, Los Angeles City Hall regularly made the nightly news because of its embarrassingly public rat infestation. The LA County Department of Public Health reported that cases of typhus were on the rise, mostly because fleas contract typhus from rats and other carriers, and then transmit the bacteria to people when they bite. Liz Greenwood, a deputy city attorney, was one of those diagnosed with typhus, which she believes she contracted through a flea bite received in her workplace inside City Hall East. 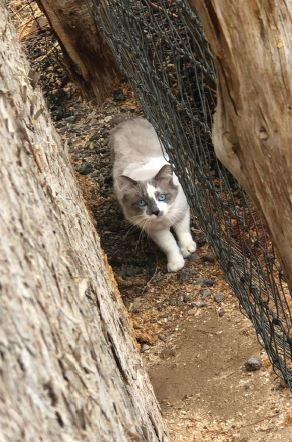 In February 2019, City Council President Herb Wesson broached the idea of drafting cats to fight City Hall’s rat infestation. Melya, who by then had placed hundreds of unsocialized cats on rodent patrol, was once again consulted as concerns rose about bacteria, contamination, and typhus potentially spreading through city offices. She explained that feral cats are the perfect solution: while the cats don’t have to do anything in particular—just provide their natural scent—they do have to be feral, because feral cats don’t want to be touched, so they won’t be stolen or harassed by people. All they require is nutritious food, clean water, and a safe, private spot to sleep and hunker down—they take care of the rest. “It’s so simple,” Melya exclaimed. Over the past two decades, VFTA has installed hundreds of feral cats in the Los Angeles Flower Market, various LAPD stations, and the Self Realization Lake Shrine in the Pacific Palisades, as well as numerous residences and small businesses.

The success of the Working Cats program paved the way for VFTA’s Barn Cat Program, which similarly relocates sterilized and vaccinated feral cats to residences or businesses with large rat populations. These working barn cats help keep barns and businesses rat-free in a humane and safe way, with no traps, no poison.

The Barn Cat Program process starts by locating unsocialized, untouchable cats, spaying or neutering them, inserting microchips, and giving them the appropriate vaccinations. The cats then visit their potential new working environment, almost always in pairs, because the cats seem to thrive living and working together, always there to keep each other company.

Sarah Hodge is one such recipient of a pair of working cats. Sarah is a barn owner who had a slight mouse problem and heard about the Working Cats program from a friend. She soon welcomed two working cats to her barn, a black and white named Frankie and a grey named Phantom. “They are pretty feral, but Frankie has let me touch him a few times and I see him a lot! Phantom kinda does his own thing and stays away from people and lives under my shed with all the horses’ bedding. But he does a great job keeping rodents away,” says Sarah. She adds, “The cats have worked out great. They’ve been released on my ranch for about a month now, and they catch mice and birds. Sometimes they leave it in the grain room for me to see, and it is super cute.”

Sarah is delighted to be part of the Barn Cat program, saying the experience has been nothing but positive. “They were able to work with my crazy schedule and fit me in. I love my cats, and I’m so glad that the animal foundation has a program like this,” she says. Sarah’s advice to prospective working cat owners is this: “Put your cats in the biggest cage you can find so they have plenty of room as they acclimate. Of course, make sure they have a litter box and lots of food and blankets.” And, she confides, “I think the wet cat food really won them over and made them stick around and call my place home!”

These hard-working, natural born problem solvers don’t ask much for their services, do they? All things considered, it’s a steal for their lifetime of service.

For more information on Voice for the Animals and the Working Cats and Barn Cats programs, visit vftafoundation.org.

Many local rescues in Southern California have implemented working cats programs similar to the one described in this article. The rescues below are among those that work with local animal shelters to save the lives of these feral cats and give them new purpose:

Previous articlePlanning a Trip?
Next articleGetting Puppy Ready for the Groomer