While that may sound like the name of an olde English pub, it’s actually a frustrating aspect of pet ownership that many people struggle with. And because bad odors make dogs hard to live with, they’re brought to the vet in search of answers. This article will go over a number of causes of doggy odor—some with clear solutions and others that frustrate us as much as it does the owners. The dogs themselves seem to be unconcerned about the issue.

The associated odor comes in two basic forms—slow or rapid onset. The slow form develops over months or years and is one of the saddest things we see as veterinarians. When teeth are not cared for, they get gum disease, a type of infection. The infection travels through the gums into the bone surrounding the teeth. The bone literally dies and slowly rots away. That rot is what you smell—the tissues supporting the teeth are decomposing right there in the mouth. This impacts not just their immediate comfort, but also their long-term health.

The more rapid onset is usually associated with an abscess or foreign material affecting only one or two teeth. There have been many cases where a pet owner picked up on an abnormal odor, but I couldn’t really see anything in the mouth on exam. Only when we took dental X-rays did the abscess become apparent, and extraction of the tooth resulted in full resolution of the odor. This is usually a very painful condition as well, so treatment is a relief for both dog and human!

Basic dental care, such as regular cleanings, brushing, and chewing sessions can go a long way toward preventing stinky dental disease in dogs.

There is a small population of dogs who have halitosis without dental disease. We can’t always figure out why, but many benefit from a good probiotic.

2. Ear infections are another common source of a foul odor in dogs, and again, the humans already suspect the source in most cases. Not only can ear infections smell incredibly awful, but they are also incredibly painful! Check out the length of a dog’s ear canal—depending on the size of the dog, it’s about five times longer than our own! And the shape—first down, then a right-angle bend—means that drainage often stays in the ear rather than leaking out. Only when the canal is full of gunk or swollen shut is the discharge obvious to the casual viewer.

Many dogs are prone to ear infections. Some due to their anatomy— hounds, for example, have large, heavy ear flaps that prevent normal circulation of air into the ear canals. This creates a permanent dark, warm, moist environment and a perfect incubator for bacteria and yeast. Terriers, retrievers, and spaniels are highly prone to allergies. Allergies in dogs cause the lining of the ear canal to become inflamed, and inflammation predisposes to infection. Various anatomical issues like pendulous ear flaps and excessive hair in the canals complicate the picture for others, like poodles and bichons.

So, if you catch a whiff of odor—check the ears. If they are smelly, or sore, or filled with gooey material, schedule a visit with your vet. He or she can not only treat the infection, but can also help you develop an approach to keep your dog’s ears healthy going forward.

Pet dogs may have sacs that don’t function normally. They may clog up (impaction), they may leak (causing an odor), or they may be expressed at times of excitement or fear. They can develop an infection that causes them to rupture and drain. Sometimes they itch for no good reason, other times they itch because they are impacted. When this happens, your dog may “scoot” by rubbing its bottom on the floor. If this happens occasionally, it’s probably accomplishing its purpose—i.e., to empty the sacs. But if they do it frequently, it may be a sign that the anal sacs need to be emptied by a professional.

4. This may sound obvious, but if your pet smells like urine or stool, check under the tail. Stuff gets stuck there sometimes. This is especially true for pets that are older, frail, or obese, or those with long, unruly fur. Dogs who accidentally urinate while lying down may develop urine scald, a painful skin condition that is accompanied by a nasty odor and can cause (or be caused by) an infection.

5. Many dogs who eat a fish-based diet or take fish oil can develop a fishy body odor. This is sometimes alleviated by simply cutting back on the amount of fish in the diet, but in some cases the fish has to be eliminated completely to resolve the odor. This is unfortunate, as many dogs benefit from fish oil’s Omega Fatty Acids, and one reason they are recommended is for chronic skin issues. There are vegetable-based omega-3 fatty acid supplements that probably aren’t as bioavailable in dogs but can be used when the odor is objectionable.

6. Gas should really be a subcategory of number 5 on this list, because dogs that pass a lot of gas often stop once their diet is changed. Since most dog foods have a basic protein and a carbohydrate in their formula, changing one or the other can have a huge impact on the bacterial populations living in their intestines. This, in turn, leads to a change in the stool and the amount of gas produced. Another option is to add a probiotic or a gas preventive such as Beano to the food.

7. Dogs walk through stuff. They injure themselves. Stuff sticks to their feet, or pokes through them. Their feet even sweat.

The foot pads and the space between can be a source of significant problems, that often go unnoticed because we don’t think to look unless the dog itself is licking one or more feet obsessively. If your dog smells and you’re not sure why, check the feet.

8. Because the skin is the largest organ of the body, and it covers the dog’s outside, it stands to reason it would be a big source of odor problems. When evaluating a skin issue in a dog, it helps us to know whether the problem has been long term or something you just noticed. Has there been a diet change recently? Does bathing improve the smell? Do certain activities aggravate it? When do you notice it most? Has the texture of the coat changed? Does it itch? Is it flaky or greasy? Much of this is apparent when we see the dog, but owners should resist the impulse to give them a nice bath just before their vet appointment, since that can change what we see.

In short: If your dog stinks, do a little detective work first. Try to figure out where the odor comes from, and whether there is obvious discomfort associated with it. Check the mouth, the ears, the feet, and under the tail. Run your fingers through their fur, see what you find. A few problems are obvious and easy to address at home. Others need veterinary care, sometimes urgently. Together, we can almost always address the causes of the stink!

Lillian Roberts, DVM, is the owner of Country Club Animal Clinic, which is located at 36869 Cook Street in Palm Desert. (760)776-7555 countryclubdvm.com 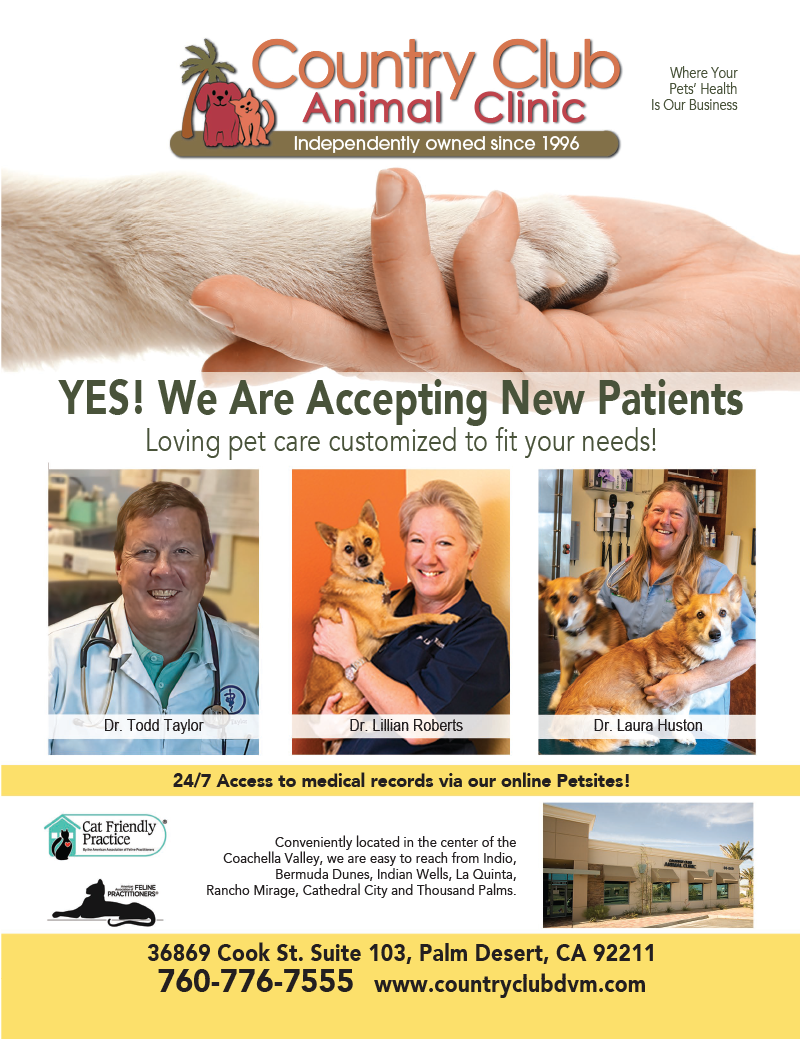 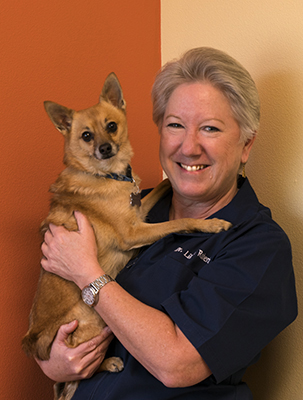