Cancers of the skin are often associated with advancing age, breed genetics, chronic inflammation, sun exposure, secondhand smoke, viruses and hormones. When evaluating skin masses, it’s important to consider some general differences in pet species and breeds. Skin masses are more common in dogs than cats. That said, the majority of skin and adnexal (pelvic region) tumors in dogs are benign, whereas up to 80% of skin masses in cats are considered malignant.

As in humans, tumors of the skin and adnexal areas occur most frequently in older patients. Some are caused by viruses such as the papilloma virus. Papilloma viruses occur in dogs and cats, both young and old. Fortunately, papilloma viruses are species specific and are not shared with humans.

Papilloma viruses can be site specific. For example, one virus subset may cause tumors on your pet’s paws, another on the eyelids, and another on the abdomen. Common cat viruses like feline leukemia virus (FELV) and feline immunodeficiency virus (FIV) don’t directly cause skin cancers, but they do negatively impact your cat’s immune response to cancer and cancer treatments.

In the Desert and other areas that experience direct sun with little or no wind or shade, radiation from chronic sun exposure causes skin cancer in both humans and pets. Luckily for our furry friends, they have natural protection from the sun, thanks to their fur. Your dog’s or cat’s coat is generally equivalent to an SPF 70 sun block. However, where hair is sparse, specifically on their noses, ear tips, eyelids and abdomens, our pets are at risk for developing skin cancer. White boxers and pit bulls are prime examples of dogs that are especially vulnerable to sun-related skin cancer.

Your pet’s skin pigmentation affords some protection against developing squamous cell carcinomas, but in some pet breeds this increases the risk for melanoma development. Pet owners should frequently check their pet’s less fur-covered areas for skin irregularities, discolorations, masses, bleeding and ulcerations.

The risk of cancer in animals can be partially attributed to breed genetics. In addition to pigmentation patterns, malignant tumors in an animal’s nail beds are frequently found in Rottweilers, black Labrador retrievers, black standard poodles, giant schnauzers and dachshunds. Curiously, what can appear as nail bed tumors in cats sometimes are not actually from the nail bed, but rather from primary lung tumor metastases that develop from secondhand smoke.

The hairless area of your pet’s abdomen is not only vulnerable to squamous cell carcinoma development but is also a site for dermal hemangiosarcoma (malignant tumors developed from cells lining blood vessels) and hemangiomas (abnormal build-up of blood vessels on or just under the skin). What’s the primary cause? Lengthy and repeated time in the sun. These blood vessel tumors appear as red-purple dots or slightly raised lesions and may bleed easily. Small dermal hemangiosarcoma and hemangiomas can be treated with liquid nitrogen. If left untreated, they can spread to your pet’s internal organs and eventually cause death.

Common adnexal tumors include sebaceous gland adenomas (small bumps on hair follicles) and basal cell tumors (malignant growths associated with your pet’s sweat glands, hair follicles, or sebaceous glands). Generally, they are confined to the skin and are effectively removed with surgery or through cryosurgery. Sebaceous adenomas (bumps on the glands of skin) are extremely common in older dogs, especially in poodles. Most of the time they are benign. Sebaceous adenomas are less common in cats. With felines, they appear like a small cluster of grapes and often ulcerate and bleed, especially during grooming, which is a reason for having them removed.

Where hair is sparse, specifically on their noses, ear tips, eyelids and abdomens, our pets are at risk for developing skin cancer. Pet owners should frequently check their pet’s less fur-covered areas for skin irregularities, discolorations, masses, bleeding and ulcerations.

Basal cell tumors are common in both dogs and cats. They are usually found on the face and limbs. In dogs, spaniel breeds experience a higher risk for these tumors. Basal cell tumors seldom bleed. However, because they arise from the melanin layer in the skin, they are often intensely pigmented and may be confused with skin melanomas. In dogs, skin melanomas are relatively benign lesions, except when they are present on your pet’s nail bed, oral cavity, or anus. In these areas, they are highly malignant. For cats, all skin melanomas should be considered malignant.

Hormones also play a role in cancer development. Veterinarians have long recognized the importance of spaying dogs and cats before their first heat cycle to prevent the development of mammary tumors.

Mast cell tumors (MCTs) are the most common malignant tumors found in dogs. They also occur in cats, though less often. Like other tumors, some breeds are more prone to MCTs. These tumors are especially common in boxers, Boston terriers, Labradors, and golden retrievers. MCTs commonly appear around the head and neck but can be found any place on the skin. MCTs contain histamine and heparin and other chemicals that result in bleeding and swelling. These tumors can appear as single masses or multiples, sometimes up to a hundred over the body.

The degree of malignancy and risk of MCTs spreading to lymph nodes and deeper tissues is based on the histologic grade of the tumor. Lower grade MCTs can be surgically removed or treated either with liquid nitrogen or injections of anticancer drugs that are administered directly into the tumor. Radiation therapy is another effective treatment for MCTs, although it can be expensive and is not always readily available.

New drugs that target MCTs include a tryosine kinase inhibitor. Basically, it’s an enzyme that functions as an “on” and “off” lever in many cellular functions and can be used in the treatment of higher grade MCTs. All MCTs have the potential to be bad actors and can spread to regional lymph nodes and internal organs and should be treated.

Connective tissue tumors occur under the skin and usually come from mesenchymal cells or fat. The most common are lipomas (benign fat tumors) which can grow very large but do not spread. However, a rare form of this tumor can infiltrate your pet’s muscle tissue and cause lameness.

The most concerning connective tissue tumors are soft tissue sarcomas (STSs), which can be divided into 22 subtypes. Nearly all behave similarly and are locally infiltrative. They are often difficult to completely remove and, in some cases, may require limb amputation to cure the patient. Higher grade STS tumors can spread to your pet’s lungs, liver, spleen, etc. That said, in such cases it is still possible to effectively treat them with aggressive chemotherapy.

Although most STSs occur in dogs, cats can also develop these concerning tumors. For felines, STSs sometimes grow at the site of previous vaccine injections or other areas where a pet experiences chronic inflammation. Such tumors should be managed aggressively. Surgery combined with radiation therapy, for example, is often the requisite treatment. If your pet develops a lump at their injection site and the lump persists for a month or longer, you should have it examined by a doctor. In contrast, STS tumors rarely develop at vaccine injection sites in dogs.

Most skin masses can be accurately diagnosed by an experienced veterinarian and certainly by a doctor specializing in veterinary oncology. It’s important for your vet to establish the grade of your pet’s tumor and its surgical margins (the requisite surgical borders for tissue removal when excising a cancerous growth). This information, which is covered in your pet’s pathology report, is essential to determine the best future care and treatment for your pet.

The key with pet skin cancer is prevention. Spay and neuter your pets. Limit the amount of time they spend in the sun. Examine your pets for lumps and bumps with your own eyes and hands at least once a month, and pay extra attention to their feet, toes, nose, ears, and bellies. Early assessment and treatment of lesions and lumps is critical. The larger they become, the harder they can be to manage and remove. The sooner we catch cancer in your pet, the more effective we are in treating it. Have your pet examined by a veterinarian at least once a year, and twice a year if your pets are older.

Previous articleRicochet
Next articleWhere Is Your Pet’s “Go-Bag?” 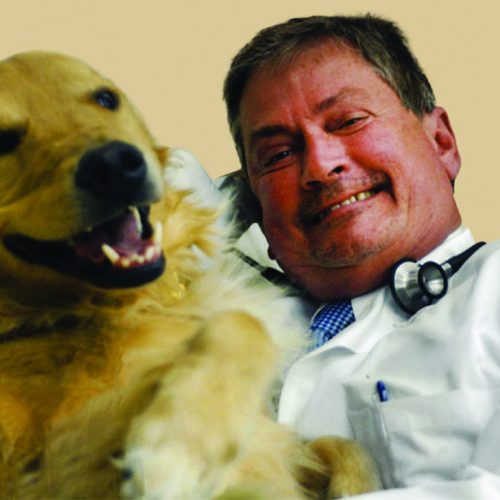