Facebook
Twitter
Pinterest
WhatsApp
Southern California is a state known for many things, from Silicon Valley to its laid-back attitude. But probably the greatest lure of the Golden State is its coastal climate and beautiful beaches. With so many of us being dog owners, of course we’d like to bring our loyal four-legged companions along to the beach when we go. But, in an effort to keep beaches environmentally healthy, officials have banned dogs from most California beaches. However, there are a few designated “dog beaches,” where dogs are welcome to play in the sand, jump in the waves, and even surf! Dog owners flock to these beaches daily, their dogs off the leash and free to run in and out of the chilly water, chasing balls, floating toys and each other. In Los Angeles county, there is only one such beach, and it’s a real gem: Rosie’s Dog Beach in Long Beach. As the only official off-leash-sanctioned dog beach in the entire county, it’s one of the hottest spots to bring your pooch to play in the sand or ride the waves.
Located between Roycroft and Argonne Avenues in Long Beach, a few blocks east of the Belmont Pier and Olympic pool, Rosie’s Dog Beach is a fan favorite for its gorgeous three-acre stretch and slew of available parking. Named after a bulldog who was just as famous in Long Beach as she was adorable, this stretch of beach is now open daily to dogs thanks to the late Rosie’s owner, Justin Rudd. A longtime Long Beach civic volunteer and advocate for the environment, dogs, and a host of other causes, Rudd led an effort that allowed dogs to play on a Long Beach city beach at an event in 2001. It was the first time in more than 30 years that dogs were allowed to enjoy a beach in the city of Long Beach. He then spearheaded an 18-month-long effort to establish that stretch of beach as a permanent dog-friendly beach in 2003. In 2010, it was officially named Rosie’s Dog Beach, in honor of Rudd’s beloved bulldog. 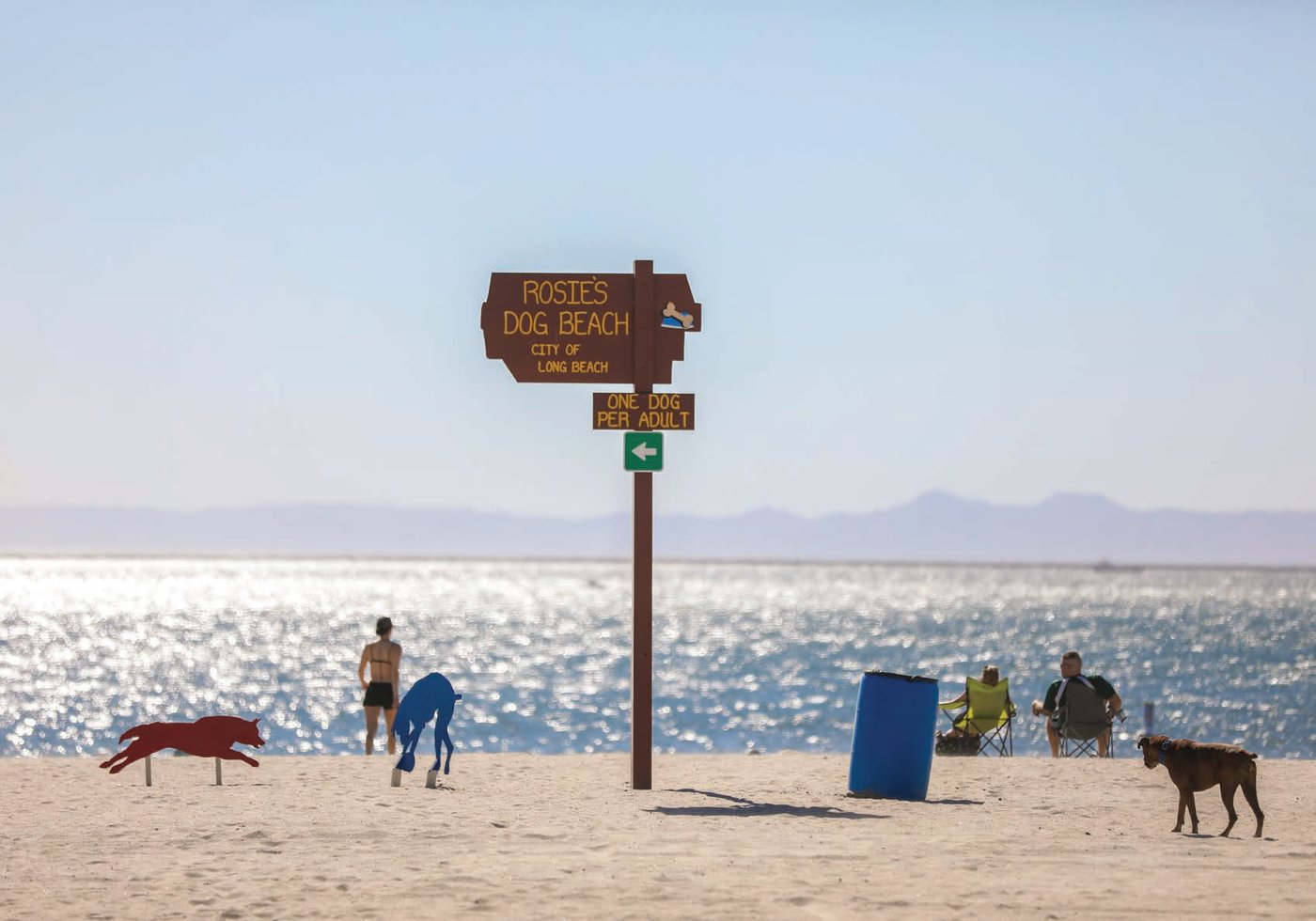 Dog beaches, being simply designated areas on other beaches, can be hard to find. They usually have signs, but those tend to be small and discrete— and therefore easy to miss. Rosie’s Dog Beach is located behind some volleyball courts, so as you approach, be sure to keep your dog close to you for safety. Dogs must be leashed everywhere except in the off-leash zone (you’ll see the signs). There’s a bike path to cross on your way to the beach, but be aware that dogs are only allowed to cross this path, not walk on it. Metered parking is available on the streets and in the large private lot that runs alongside the beach. Parking in the lot puts you in a good position to explore some of the fun local shops and unique eateries with your dog while you’re there. Rosie’s Dog Beach is open from 6 am to 8 pm daily. Quiet and peaceful on most weekdays, the beach gets fairly busy on the weekends, so be sure your dog is comfortable meeting lots of new, very excited dogs.

Like most dog-friendly zones, there are rules that must be followed. Only one dog per adult is allowed, so if you have a whole pack, please bring some friends. All leashes must be a maximum of 6 feet, and the individual holding the leash must retain control of the dog at all times. Aggressive dogs are not allowed. Dogs should be sporting a collar with current registration tags (as required by the county), and, for safety reasons, no spiked collars are allowed. All dogs must have current vaccinations, and pups under four months old shouldn’t be at the beach. 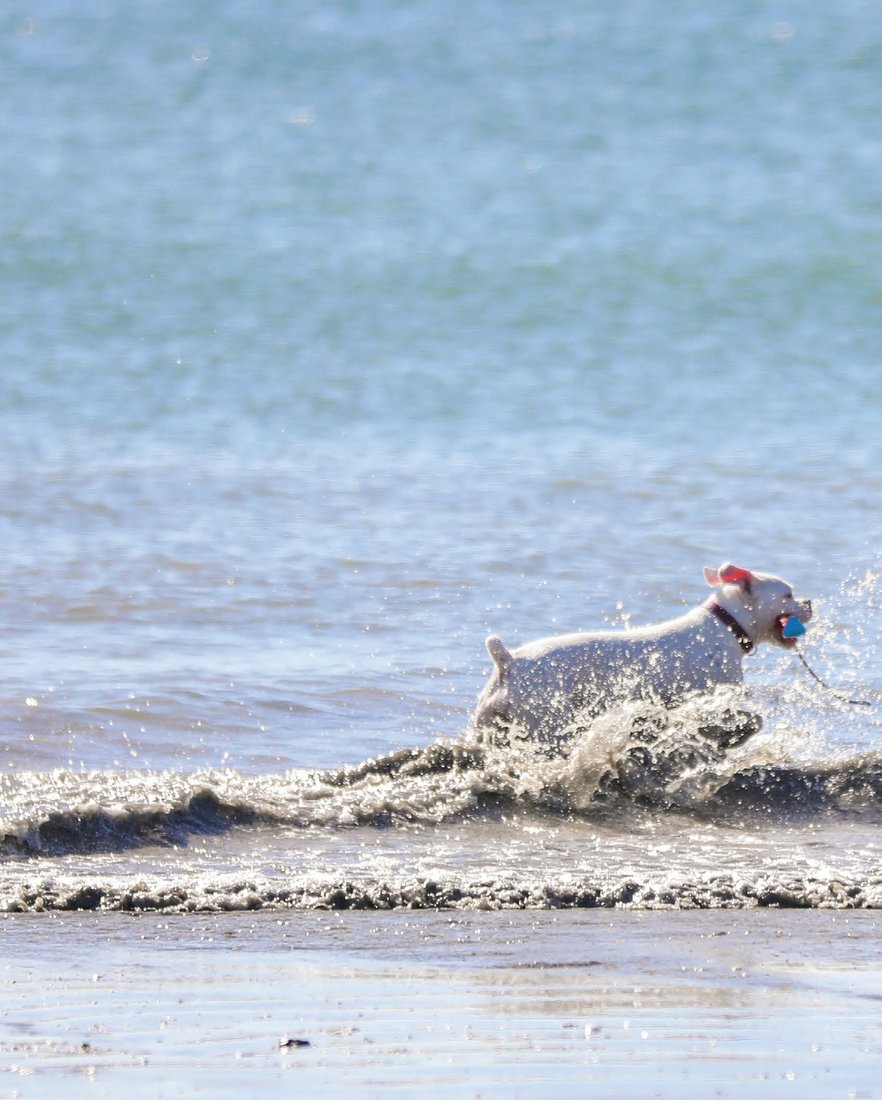 Parking can be found along Camino del Mar behind the beach and also at 29th Street, and parking is free. From 29th Street north all the way to Solana Beach, your dog(s) can run freely, except during the summer months when they must be on-leash. The main part of this beach is on the north side of the San Dieguito River Lagoon entrance next to Camino del Mar. This beach features a slew of amenities such as a volleyball court, so be prepared to ensure your pup is people-friendly.

Parking for Dog Run Beach can be found along the north end of Ocean Boulevard outside of the naval base entrance, and it is completely free. Officially, the Dog Run Beach is the North Beach of Coronado Beach in front of Sunset Park. Dogs can be off leash on this beach, unlike all of the other beaches along the Coronado Island shoreline. Do keep in mind that dogs are not permitted on any other part of Coronado Beach. 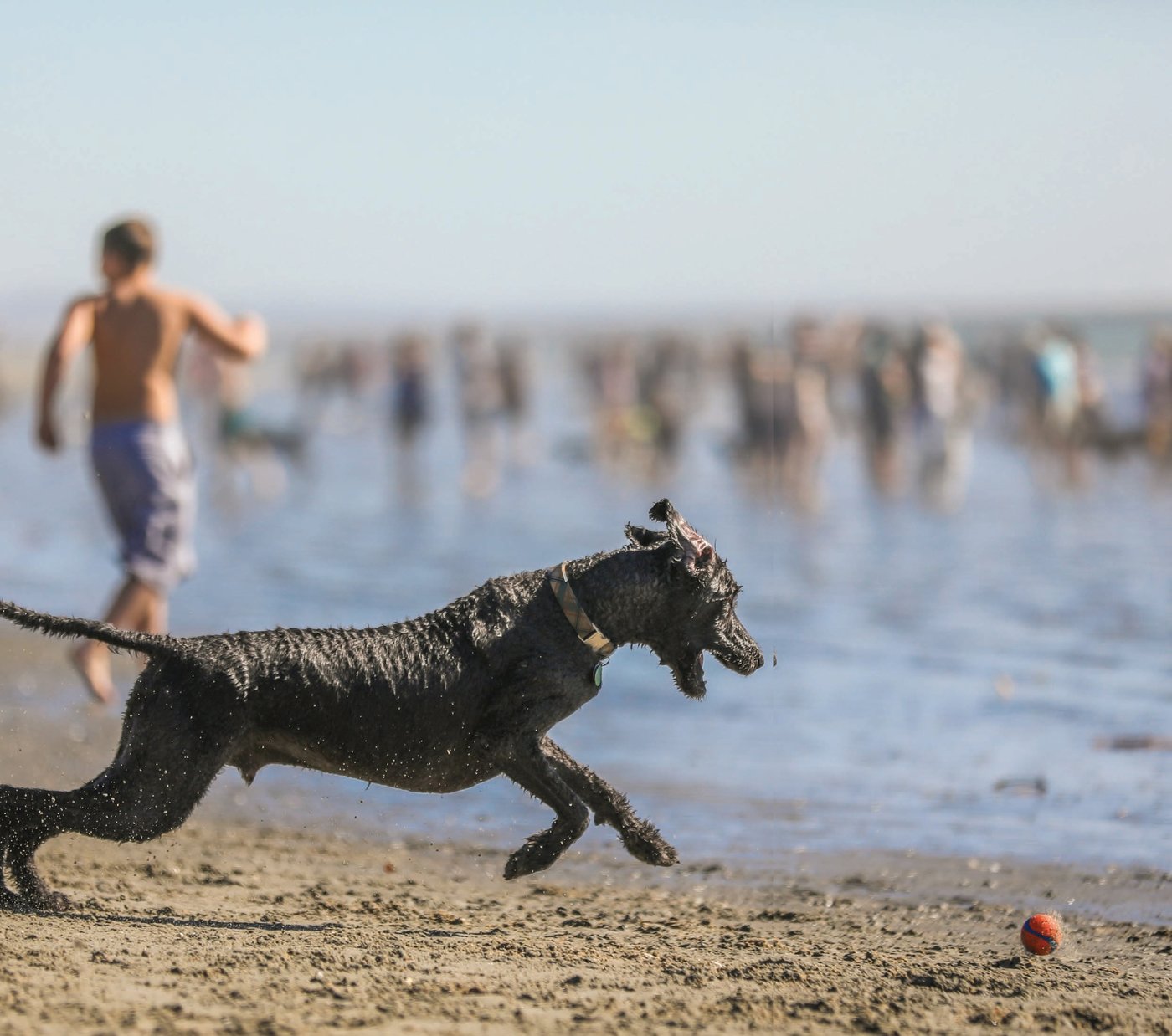 Like many Malibu beaches, parking is free alongside the Pacific Coast Highway, or you can park in a designated beach lot. Parking is $12 to park all day (and less if you’re only staying for an hour or two), but there’s no entry after 10 p.m. Dogs are allowed on leash only, and the leash must be a maximum of 6 feet. There are very specific rules for bringing your pup to Leo Carrillo. Dogs must remain west of Lifeguard Tower 3. Dogs are not allowed east of Lifeguard Tower 3 at the park, and they can’t romp around in the tide pools. Despite these restrictions, there is still plenty of room for your pup to run around!

Information: There is plenty of free parking all over the place for this amazing dog beach. Fiesta Island has an impressive 27 miles of beautiful beach.Happily for dog owners, most of this large sandy island in Mission Bay is designated leash-free for dogs. Fiesta Island Off-Leash Dog Park has lots of sandy dunes to romp in, and the calm bay waters allow the more adventurous dogs take a quick dip. There is a designated off-leash location on the backside of the island as Sea World will be on your left, fenced-in front with signs.

News from the Coachella Valley {IN CV}