Pet Air Transport: A Quick Trip to a New Home

In the United States, four million pets are killed each year. Why? Because they are homeless. Even in some no-kill shelters, pets are “put down” for behavioral and health problems, many of which could be easily treated, if only they had a loving home and responsible pet owners. But did you know that in some areas of the country, animal shelters actually have a shortage of adoptable pets? It may be hard to imagine, with our local shelters bursting at the seams, but it’s true.

In the Pacific Northwest, potential pet owners wait for adoptable pets to become available. Animal shelters there (and in many other parts of the country) can’t keep enough animals on hand for the number of people wanting to adopt. They rely on overcrowded shelters such as those in our area to “feed” them our overflow of dogs, cats and other pets so they can meet their local area’s adoption needs.

But moving the shelter pets from overcrowded shelters to underpopulated ones isn’t easy. It’s costly and it takes a lot of time and effort, not to mention countless volunteers. Transporting shelter animals over ground is time consuming and can even put the health and safety of the animals at risk. These long road trips—in some cases for 24 hours or more—are arduous for pets, with the animals unavoidably confined in their crates for long periods on the journey to a welcoming shelter. 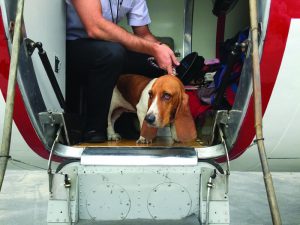 Thankfully, one nonprofit organization has been working since 2009 to provide the speed and safety of air transport for thousands of pets from high-kill shelters to no-kill shelters throughout the country. By working in partnership with shelters around the country, Wings of Rescue has made the transport of shelter animals more efficient and, because they travel by air, also faster and safer. Ric Browde, board member and head of logistics for Wings of Rescue, reports that, to date, volunteers from Wings of Rescue have flown almost 25,000 pets to Oregon, Washington, Idaho, Montana, Colorado, and across the country to New York, New England and even Canada.

Using its own cargo plane and volunteer staff, as well as donated airplanes and pilot time, Wings of Rescue quickly flies as many as 138 pets on a single plane to safe shelters, where forever homes await. In 2016 alone, volunteers flew 130 rescue flights, carrying almost 10,000 pets (including over 1,500 cats and 70 rabbits) to safety. Wings of Rescue only transports pets to no-kill shelters, and no local shelter pets are ever displaced by the incoming transports.

Last August, during the catastrophic flooding in Louisiana, Lafayette’s shelters were extremely overcrowded, and there were more pets arriving at their open-admission shelters every day, according to Wings of Rescue’s website. The shelters were well past their capacity and had run out of options—highly adoptable pets were facing imminent death. Wings of Rescue reached out to its no-kill shelter partners throughout the Pacific Northwest who were ready to provide sanctuary and new homes for these pets. Making five flights, Wings of Rescue’s Metroliner (which they like to call their “modern version of Noah’s ark”) carried 252 dogs (mostly large-breed) and 208 cats to safety, flying them to no-kill shelters in Utah, Oregon, Idaho, Washington and San Diego.

Happily, every single one of those rescued pets has been adopted. However, thousands of homeless pets remain in Louisiana’s shelters. Sadly, the euthanasia rate for cats in Louisiana’s municipal shelters is over 99 percent and over 80 percent for dogs in many of the open-admission facilities. It costs Wings of Rescue $17,000 to fly a rescue flight from Louisiana to safety in the Pacific Northwest, but Browde says, “It’s well worth it if we can save these precious shelter pets’ lives.”

Wings of Rescue was founded in 2009 by Yehuda Netanel and Cindy Smith, two private pilots, business leaders, and shelter pet advocates, who noticed how inefficient the systems were for transporting animals between shelters. Putting their heads together, they devised a volunteer system through which donated airplane flights (and piloting services) could carry full loads of shelter animals from one location to the next. Through the years, the organization has built up a network of pilots, all of whom are volunteers. Says Browde, “During 2013 and 2014, we transformed the whole operation, using much larger planes to transport hundreds of dogs and other pets at one time.”

But flying pets from overcrowded shelters to empty ones isn’t Wings of Rescue’s only goal. “Our ultimate goal is to put ourselves out of business,” reports Browde. But to do that, he admits, “We need a responsible nation.” Spaying and neutering, microchipping, and vaccinating pets are all important components of being a responsible pet owner. Toward that end, Browde and the entire organization make education a large part of what they do.

The organization funds many spay and neuter events in southern and central California. It is also working with the Bakersfield City Shelter to provide free spays and neuters to the homeless community in that area, as well as starting a trap-and-release program for the feral cat colonies.

“We need to end the number of unwanted pets flooding our animal shelters,” says Browde. “Educating pet owners about the importance of surgically altering their pets and offering free and low-cost spay/neuter services are the only answers to this problem.”

Another problem the organization is helping to tackle is improving the health of shelter pets. Last August, it began working with noted homeopath Paddy Canales to help end the epidemics of parvo and upper respiratory diseases that affect shelter pets. Wings of Rescue has sponsored a trial program at the Kootenai Humane Society in Hayden, Idaho, and reports that already it has made strides toward ending these diseases and has helped discover ways to bring the cost of treatment “down to a few dollars rather than the hundreds it now costs.” The trial program is being expanded this year into the Bakersfield shelter and published findings are expected later this year.

Air transport of shelter animals is a huge leap forward in saving the lives of thousands of shelter animals that might otherwise be put to death because of overcrowding. Saving the lives of the animals already in shelters is an immediate emergency, but spaying and neutering as a part of responsible pet ownership is critical to helping alleviate this problem in the future. Today, with the help of organizations like Wings of Rescue, pets are finding homes in areas where there is a shortage of adoptable pets and many loving homes ready and waiting to welcome them. But Wings of Rescue is not just a shelter pet transport organization, and transport organizations alone won’t be able to eliminate the needless deaths that take place every day in animal shelters across the country. Wings of Rescue is a model for organizations committed to the welfare of shelter animals and saving as many pets as possible through not only transport and relocation, but also health innovation and spaying/neutering.

Previous articleHow Clean Is Your Pet’s Water Dish?
Next articleMeet Bogart of the Beagle Freedom Project