Mutual Rescue™ illustrates how rescuing animals impacts the lives of humans, often in quite profound ways. The lives of both people and pets are enriched when homeless animals are adopted and local shelter groups are supported through donations and volunteering in their communities. Check out the video links below.

“Jade & Trubs” An unadoptable cat with a chronic illness and an autistic girl form an instant and unexpected bond.

“Eric & Peety” He weighed 340 pounds and was diagnosed with high cholesterol, high blood pressure, and Type 2 Diabetes. His doctor told him he had 5 years to live. Then he met a shelter dog who changed everything.

“Kylie & Liza” In her final days, a young girl with cancer was comforted by a rescue kitten. The kitten then intuitively comforted the grieving family after Kylie’s passing.

“Tracy & Jack” When a woman and a dog separately suffered extreme injuries, they managed to heal each other. The dog’s positive attitude and spirit helped her along her own road to recovery.

“Mike & Abbie” When everything in his world collapsed around him, a young man found a shy Kelpie pup traumatized from having been abandoned on a busy highway. Together they embarked on a remarkable journey of recovery that resulted in travel, accolades, and joy.

“Patrick & Grace” After taking in an abused pit bull, a young competitive athlete suffers a debilitating stroke. This is the story of a strong dog and strong man building each other back up.

“Sarah & Domino” A young woman’s chronic pain led her to become addicted to drugs. Rescuing a neglected dog became a catalyst for change in her own life.

“Kim & Brian & Lana” A young couple is devastated by the death of their newborn baby. Adopting a German shepherd mix gave them an outlet for their grief and helped the couple bond again. 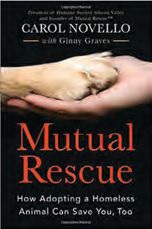 Mutual Rescue: How Adopting a Homeless Animal Can Save You, Too»

Available at your favorite Bookstore: Mutual Rescue: How Adopting a Homeless Animal Can Save You, Too