The award-winning surf dog Ricochet is well known around Southern California and beyond—she was one of the original San Diego surf dogs, a founding member of the dog surfing circuit, earning several accolades along the way and even appearing in the 2019 SuperPower Dogs IMAX movie. Although Ricochet no longer surfs competitively, the beloved golden retriever continues to catch waves and share good vibes as a surfing therapy dog. For more than a decade now, Ricochet has helped to heal and transform the lives of countless wounded warriors and veterans with PTSD, children with special needs, and many other people with disabilities. As a canine ambassador for adaptive surfers, the registered and certified goal-directed therapy dog continues to inspire through her powerful healing work. We recently caught up with Judy Fridono, Ricochet’s owner, to find out what this champion surf dog has been up to lately.

Has Ricochet been able to continue working as a therapy dog during the global pandemic?

For the first two months of the shutdown, we stayed home as directed. At that point, we created a stress-reducing page on her website. At the same time, we started providing Zoom visits for doctors, nurses, first responders, other essential workers, and the families of those who lost a loved one to the virus. From there, we created Zoom visits for kids.

After two months, we started outdoor “house visits” because Ricochet needed physical contact with people and vice versa. Then we also incorporated distance-learning.

Can you tell us about the Waves of Empowerment program that brings veterans together with children who have special needs?

Waves of Empowerment brings together veterans with kids who have special needs. The veteran is a mentor for a day and the kids get their own hero for a day. They are matched one-on-one for the activities of the day. The veteran benefits because they are often lost after coming home and retiring from the service after they’ve been serving their country for years. This gives them the opportunity to be of service again. Both veterans with PTSD and kids with autism or other special needs often have the same social anxiety. So, bringing them into an environment where everyone is equal and non-judgmental is very empowering. 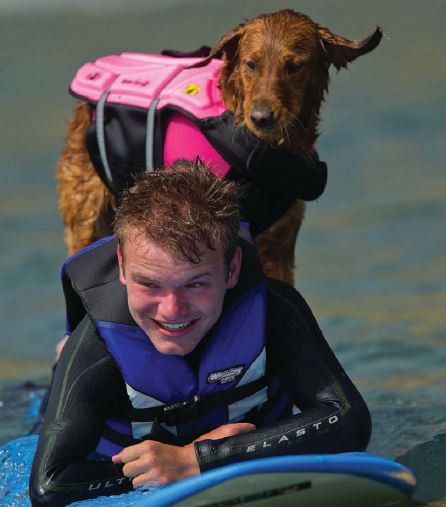 As a therapy dog, how does Ricochet help to heal and transform people’s lives?

She’s very beneficial in the recovery process of someone who has experienced trauma. She makes immediate, very deep connections with people. She is able to go past the outward facade and reach a person’s soul. As such, the healing is deeper and more successful. What could take a counselor or psychiatrist months or even years to uncover, Ricochet can do in one visit.

When she’s working with veterans, she also does what I call metaphorical behavior, where she shows me what a person is feeling through her behavior. This gives the veteran an opportunity to see something tangible to validate their emotions that aren’t tangible. I have many veterans tell me Ricochet is the only one who believes her. She validates their emotions, she believes them, and she goes into their world, as opposed to asking a veteran with PTSD to function in our world after having to be hypervigilant 24/7 like on the battlefield. Dogs are hypervigilant by nature, so the veteran can watch Ricochet’s behavior in response to a change in the environment. If the behavior is subtle, like a flick of an ear or a turn of the head, there is no perceived threat in the environment. But, if she does something like stand up from a laying down position, something more has come into the environment and the veteran can respond to it. 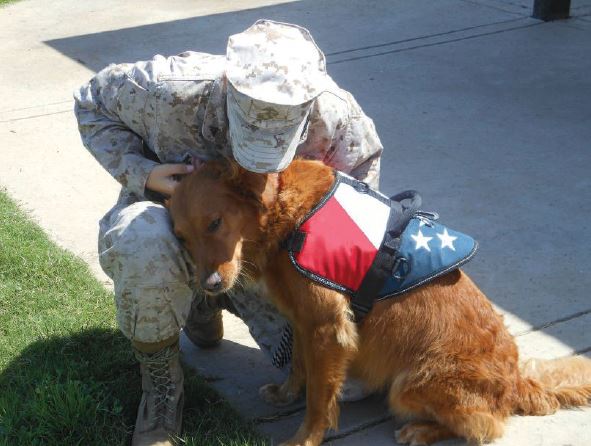 She also alerts to their triggers, pain, anxiety, and other emotions, so the veteran can assess the situation or take a moment to check in with themselves to see what she is alerting to.

Of all the people that Ricochet has helped heal over the years, are there any individuals whose healing journeys have really stood out to you?

The one that stands out the most is the first person Ricochet ever surfed with, and that is Patrick Ivison. He was 14 years old when we met him. It was after a year of conflict between me and Ricochet. I wanted her to be a service dog, and she wasn’t interested. The day we were getting together for Ricochet to surf beside Patrick, a quadriplegic adaptive surfer, was meant for a visual for the fundraiser we were doing for Patrick’s recovery. They were pushed on a couple waves next to each other a few times, and then one time Ricochet jumped off her board onto Patrick’s. She was so happy and was finally able to show me what she is on this earth to do. From that moment forward, I stopped wanting her to be something she wasn’t and allowed her to be who she really is. I’ve nurtured her natural abilities, and she became a very powerful healer. That day was the springboard to the rest of her life of healing others.

Although Ricochet no longer surfs competitively, the beloved golden retriever continues to catch waves and share good vibes as a surfing therapy dog.

What do you think it is about Ricochet that makes her able to connect so deeply with individuals from different backgrounds?

She’s incredibly intuitive. She also takes responsibility for a person. So, if there is a perceived threat in the environment, she will alert to it. Many times, the person isn’t even aware there is a trigger. I also think me nurturing her natural abilities has helped a lot. Plus, I’m able to understand what she is communicating. Dogs are always communicating with us, we just have to listen. Often, we think their behavior is misbehavior, but most of the time they are actually trying to communicate something. I have spoken with many scientists trying to figure out how Ricochet does what she does. None of them have been able to give me an answer. They say things like “Ricochet is ahead of science” or “She made me a believer, but I don’t have a scientific answer.” So, I honestly don’t know how she does what she does. It’s very powerful, though!

What’s been the greatest joy for you as the owner of Ricochet?

Learning so much from her and being able to help others because of it.

Any final thoughts to share about Ricochet and the healing work she performs?

I believe all dogs are capable of what Ricochet does. Don’t get me wrong, she’s definitely a special dog, but if we nurture our dog’s natural tendencies, we will have a much deeper relationship with them.