Dogs have been companions to people for thousands of years. Archaeological evidence of canines and humans being buried together 14,000 years ago indicates the close bond that existed between people and dogs at that time. Back then, canines held jobs such as herding, hunting, and guarding. In Europe and Asia, they helped shepherds protect their goats and sheep from such predators as brown bears, lynxes, and gray wolves.

In more recent history, humans discovered that dogs’ noses were vastly more sensitive than their own, and they used the canines for solving problems such as searching for drugs and explosives or locating missing persons. With growing pressures on the environment, the climate emergency, and many wildlife species on the brink of extinction, humans have now turned to one of our oldest technologies to help tackle new challenges they are not equipped to handle alone.

A Nose for Conservation

A growing number of trained detection dogs and their handlers are called on to assist in global conservation efforts. Because their expert noses can smell what humans can’t, dogs are sent to find tiny, elusive, or rare endangered animals, and plants in huge areas. They detect unwanted and harmful species; find animal traces, such as minuscule scat or caterpillar larvae that are almost invisible to the human eye; detect illegally obtained wildlife products, such as rhino horns, shark fins, and elephant ivory; and retrieve animal carcasses by following scents hidden in deep vegetation or even in the water.

Detection dogs are quick and efficient and help scientists collect vital information about plants and animals that would be difficult to obtain otherwise, and they do so in a noninvasive way. The dogs can search large areas, tough terrain, and multiple items a lot faster than a human could and with a higher degree of accuracy. For example, a study compared the performance of dogs and humans in a field survey to detect koala scat in Australia and found that the detection dog team was 19 times more time-efficient and 153 percent more accurate than the human-only team.

With their super noses, conservation canines are making a difference for the future of fragile species. For example, a project run by Working Dogs for Conservation (wd4c. org) that relied on detection dogs to find the scat of the endangered San Joaquin kit fox provided the evidence that led to the development of new protected areas in the San Joaquin Valley in California.

In Washington, dogs have helped scientists collect hundreds of scat samples for the endangered Southern Resident killer whale population. Poop contains a lot of valuable information about an animal’s health, diet, stress levels, reproductive status, and exposure to toxins and diseases. Thanks to the dogs, the scientists discovered that orcas had unsuccessful pregnancies due to malnutrition and high stress. These findings were vital to advocate for better protection of Chinook salmon, the orcas’ main food source.

A New Purpose for Unwanted Dogs

These four-legged conservation heroes do not need to be a specific breed. In fact, animals chosen to be conservation dogs often start out as unwanted pets. They are highly energetic and need lots of exercise. While most dogs love toys, these dogs have an obsessive play drive. In a home where their needs are not met, they can become aggressive and destructive. They do not make good pets and are often surrendered by their owners to animal shelters. Sadly, once in shelters, they have little hope of being adopted. Yet, their intense energy, obsession with play, and ability to focus make them ideal conservation dogs. 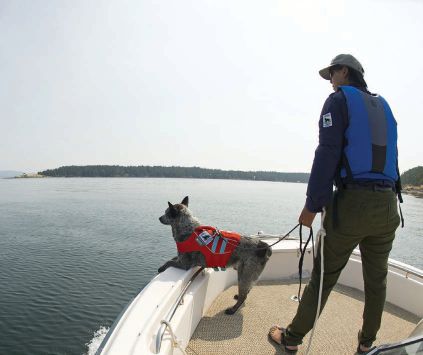 Dio is sniffing for orca scat, with the support of his human partner, Collette Yee. photography by Isabelle Groc»

Or course, not every shelter dog is cut out for wildlife search missions, and candidates are carefully evaluated and trained by the organizations that work in this field. Over the years, Heath Smith, cofounder of Rogue Detection Teams (roguedogs.org)—a Washington-based group that utilizes detection dogs for conservation projects—has facilitated the rescue of over 40 energetic, unwanted dogs from shelters to redirect their insatiable play drive to wildlife conservation. “Often when dogs join our team, we can see that they can be hesitant to partake in certain behaviors, like tugging on a ball or even just roaming a bit further from us. So, we work to let them be themselves. We want them to be independent, confident, and trust us,” Smith says.

Not a Job for Everyone

While the dogs’ potential for wildlife missions seems boundless, their success depends on the teamwork between the handler and the canine partner. It usually takes about two years to train handlers in an organization such as Rogue Detection Teams, as they need to gain the knowledge and experience required to read a dog’s signs and develop the patience to work with such a high-energy animal. Handlers have to learn to think like a dog, speak like a dog, and be intuitive and flexible. They must, like the dog, be physically fit, able to tolerate extreme weather conditions, and have sufficient stamina to search for hours in often remote, rugged, and inhospitable environments.

Can Your Dog Become a Conservation Canine?

While the work conservation canines do is specialized, there is still some potential for people and their pet dogs to assist in environmental projects as citizen scientists. For example, in Australia, the group Canidae Development (canidaedevelopment.com.au/) trained community volunteers to work with their own dogs to detect the scat of the tiger quoll, the largest marsupial carnivore surviving on mainland Australia. Quolls have declined due to habitat loss and introduced predators such as foxes. The organization Conservation Dogs of Hawaii (conservationdogshawaii.org/) is also working with pet dog owners who search for the invasive devil weed, a plant that is highly toxic to livestock and threatens the native ecosystem in O’ahu.

Even though pet dogs may not become conservation canines, they will benefit from activities that unleash their sniffing abilities. In our modern, urban world, canines have lost the jobs they were historically meant to do. They no longer have sheep to herd or animals to hunt, and they don’t get to fully use their amazing sense of smell for those jobs. 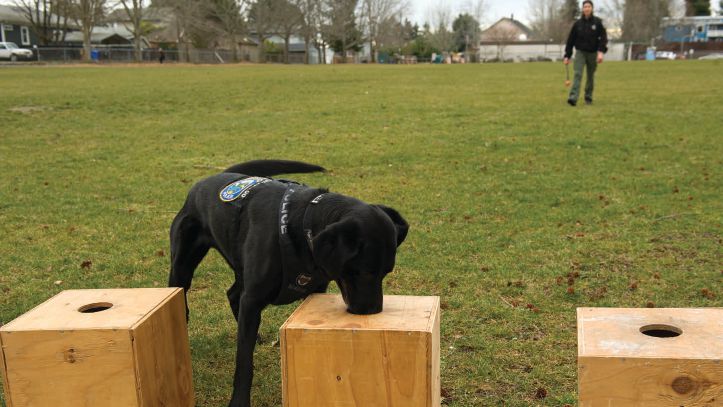 Scent detection classes can help pet dog owners stimulate their animals’ sniffing skills and foster their natural instinct to hunt. In nose work classes, dogs get to use their noses to hunt for a favorite food or toy. The canines search vehicles, containers, and indoor and outdoor settings so they are exposed to the full experience of scent detection with a variety of distractions and air flow challenges. Then a target odor—usually essential oils—is introduced, and dogs learn that every time they detect this scent, they are rewarded with treats or a favorite treat.

Scent detection activities get dogs to think independently and can significantly improve their physical and mental well-being. In fact, some dog trainers now incorporate nose work in training plans for dogs that are high energy or display aggression and reactivity issues.

“It is something that every dog can do,” says Kyoko Johnson, the lead K9 trainer of Conservation Dogs of Hawaii. “Pet owners also benefit from trying it because it gives them an understanding of what a dog is really about and how they perceive their world.

Isabelle Groc is an award-winning writer, conservation photographer, book author, documentary filmmaker, and speaker focusing on wildlife conservation, endangered species, and the relationships between people and the natural world. Her latest book, Conservation Canines: How Dogs Work for the Environment, with a foreword by Anjelica Huston, highlights the human-animal bond and discusses how dogs are lending their paws and noses to fix some of the most complex environmental problems on the planet. To learn more about Isabelle’s work, visit her website at isabellegroc.com and follow her on Instagram @isabellegroc.