Dogs of Many Colors

Unique color coated dogs—increasingly, I see interesting new color variations of standard dog breeds in advertisements, social media, and in the hospital. Not only color variation, but also patterns—think merle, spotting, or brindle. Human beings have a tendency to apply value to rarity, and it appears the color of their dogs is not exempt. And you have to wonder, how are animal breeders producing these individuals? As with many things in biology, it comes down to genetics. And unfortunately, in biology, rare is not always a good thing. In fact, more often than not, it carries more potential risks.

Before discussing specific types of coat colors and the commonly associated genetic diseases that we see in veterinary medicine, one needs to briefly review their high school biology notes. Specific traits, such as coat color, have a genetic basis. This means that within every animal’s DNA there are specific genes, or sequences of DNA, that ultimately code for a particular trait. Usually, this does not occur in a one to one ratio and multiple genes are involved. Additionally, every year scientists learn more about how factors apart from the DNA—i.e., “epigenetics”—can also play a role in the ultimate outcome of gene expression. This means that, in some circumstances, environmental factors, such as diet, stress, pollution, and other factors can affect how the body expresses or translates DNA into meaningful traits. Fortunately, coat color phenotypes, or traits, tend to be more straightforward, and the manner in which the genes that code for them operate and are inherited has been extensively studied and researched.

Dogs have 39 pairs (78 total) of chromosomes. Cats have 19 pairs (38 total). (Humans have 23 pairs; 46 total). Like humans and other mammals, dogs and cats have one pair of sex chromosomes (X & Y), and the rest are what scientists call “autosomal” (non-sex linked). Many genes and the enzymes they code for play a role in skin and hair development. For coat color, specifically, we are often studying how genes affect the production of two pigments—eumelanin and pheomelanin. Eumelanin provides hair with dark coloration (black/brown) while pheomelanin provides lighter coloration (red/yellow). These pigments are produced by cells in the body, called melanocytes. The two pigments are actually derived from a precursor molecule that can follow one of two biochemical routes to produce either eumelanin or pheomelanin. This process depends on a few enzymes (including an important one, called tyrosinase) that work to alter the precursor molecule to make either pigment. Now, I know that may be a lot of “science,” but the general gist then is that the wonderful combination and variety of coat colors we see in dogs and cats can be created by altering just a small number of things biologically: (1) melanocyte distribution, (2) enzymes, such as tyrosinase, to make the pigments, and (3) degree of expression of pigment, or numbers of copies of genes. The concurrent genetic diseases then associated with these rare coat patterns often then is related to one of the following three components.

Color dilution alopecia is a dermatologic (skin) condition that affects a number of dog breeds that have lighter or “diluted” coat colors. Think of silver/blue, lavender or fawn colors. Many breeds can be affected including Dobermans (the poster child), dachshunds, Labradors, greyhounds, Chihuahuas, and quite a few more. The coat color is linked to a recessive allele (d)—meaning that if a dominant copy (D) is present, the color dilution is less marked or masked. The genetics are actually more complicated and not fully understood, but because the traits are recessive, the variation is less common. Therefore when people try to select dogs with these less common traits, there is increased risk that other associated traits (meaning genes that are in close proximity along the strand of DNA) can unintentionally be selected for, and therefore become more common in these dogs. Specifically with color dilution alopecia, veterinarians see patients with areas of hair loss (alopecia), scaling and dandruff, and crusted, dry skin. Although generally more of a mild disease, these patients are more prone to secondary skin infections, sunburn, skin hypersensitivities, and other dermatologic conditions. There is, of course, no cure and appropriate lifelong management will be needed for the skin.

White coat colors are derived from the absence of pigment in the hair shafts. White color can be diffuse (the entire coat) or in a pattern (spotted Dalmatians, piebald, etc.). The mechanism or underlying genetic cause is going to vary, but again is often attributed to one of three things: (1) lack of melanocytes, (2) altered or lack of enzymes, and (3) altered expression. One of the most common associated congenital disease with white coats is deafness. The interesting reason for this is that the aforementioned melanocytes, which produce pigment for hair, also play a role during development of the structures of the inner ear needed for sensing sound waves and transmitting those signals to the brain. Common breeds that can be born with either unilateral (one-sided) or bilateral (two-sided) deafness include Dalmatians, cattle dogs, setters, bull terriers, and many others). This type of deafness associated with white coat coloration is congenital, and there is no therapy since the problem was the development of the inner ear.

Merle coat colors are increasingly popular with the unique tri-color pattern and associated multi-colored blue eye colors. A specific gene has been identified that leads to this coat pattern (although other genes can play a role in mild variations). The gene affects the production of what is called PMEL or “premelanosomal protein,” which is used by melanocytes for pigment stabilization specifically for eumelanin (the dark brown pigment). So when there is a defect, this results in a lighter color; hence the grey (compared to dark brown/black). Dog breeds with this “valued” coat color are usually tri-color, so the white and tan regions look similar to non-merle variations because they do not contain eumelanin but rather either pheomelanin (tan) or no pigment (white). The extent and variability of pattern of color is influenced by other genes and environmental factors (e.g., stress, diet, nutrition). 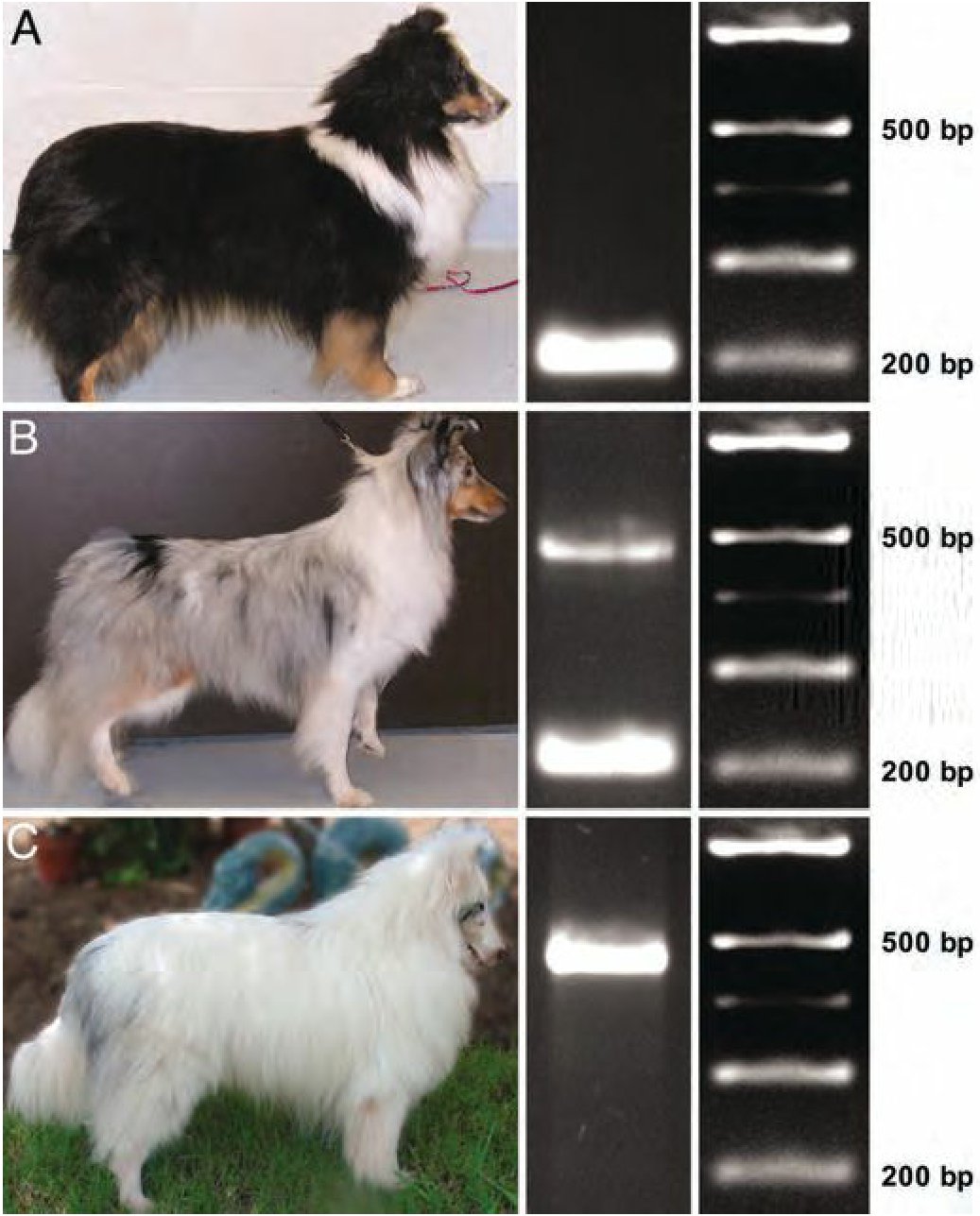 Fig A: normal type with two copies of non-mutated gene. Fig B: Merle type with one copy of normal and one copy of mutated “Merle” gene. Fig C: “double” Merle with both mutated copies.»

Dogs with the classic merle coat are what scientists call “heterozygotes,” meaning they have one copy of the normal PMEL gene (m) and one copy of the mutated PMEL gene (M). When a dog has both mutated copies (MM), they are called by breeders a “double” merle. Their coats are lighter and have predominantly blue eyes. Unfortunately, the mutated gene is also associated with common congenital defects, such as microphthalmia, or small abnormally developed eyes, and often abnormal hearing. Many can be blind and deaf. This type of genetic offspring occurs if a standard merle is bred with another standard merle, and the offspring receives the mutated gene from both parents. Hopefully, people choosing to breed these dogs are doing so carefully and under the guidance of a veterinarian, however, this is not always the case. In part, it is why I have reservations when people express interest in selecting animals purely for rare or unique coat colors—the risk for medical issues both at birth and in the future are potentially increased.

A. Being Merle: The Molecular Genetic Background of the Canine Merle Mutation. Genes (Basel).