Home Health Care Disabled Pets Get the Help They Need

Who among the pet-loving community does not want their dogs to live forever? When pets start experiencing the effects of aging, or become disabled due to disease or injury, pet caretakers want to do everything they can to help them. Fortunately, there are many resources available these days to give disabled pets a high quality of life, while also giving pet owners the support they need to make it all work.

Dotty, a 12-year-old Pug, lives in San Diego with Ronnie, a professional photographer. Dotty’s ability to “hold a pose” and Ronnie’s photography skills have proven to be a winning combination; photos and a video of Dotty donning “hair” or “buck teeth” made of French fries have gone viral on the social media circuit.
Good health had been with the photogenic Pug until about a year ago when Dotty started slipping a bit and dragging her back legs. A trip to the veterinarian determined that Dotty has degenerative myelopathy (DM), a progressive disease that gets worse over time. DM is most often seen in German Shepherds, but many other breeds are also afflicted with the disease.

At first, Ronnie used a harness to help Dotty go through the paces of her daily routine. But before long, Ronnie suspected that his beloved canine companion was beginning to show signs of depression. “Dotty wasn’t the same vivacious pup that she used to be when she could still use her legs and run around and play,” Ronnie said. “She slept a lot more, neglected her toys, and whined more when it came to her food or other things she wanted.”
Ronnie had struggled with depression himself and had been through difficult times in his life; it was Dotty who had been there for him. His realization of Dotty’s unconditional love had gotten him through his darkest hours, so there was no question in Ronnie’s mind that he would do everything within his power to help her. “It hurt my heart so much to see her like that,” he said.  “I could tell that she wouldn’t be able to continue down that path for too long, and I needed to get her help.”

Ronnie launched into research mode to see what was available to help Dotty regain some of her mobility. “I had seen wheelchairs for bigger dogs, but they looked so mechanical and scary – and expensive. I began to consider making one on my own,” Ronnie said. It was during this process that he came across an affordable, adjustable wheelchair and placed an order.

“Within five minutes of getting into the wheelchair, she was off to the races!” Ronnie reported. As he had hoped, Dotty’s outlook on life improved significantly. “Once she was able to ‘walk’ again and go outside and sniff the flowers and lamp posts, I saw an almost immediate change in her. She began to play with her toys, and moreover, she was dreaming! She would kick her legs and even bark in her sleep.”

As Ronnie and Dotty navigate through life with DM, Ronnie has also learned to deal with incontinence issues that developed for Dotty this past summer. “She leaks all the time and it’s very hot in southern California, so she doesn’t like to wear a diaper.” Ronnie expresses Dotty’s bladder, also known as manual compression – helping her to relieve herself. He’s developed a system that works, including occasional use of doggie diapers and strategic placement of potty pads.

Ronnie takes the extra assistance he provides for his dog in stride. He wouldn’t consider doing anything other than everything he can for Dotty. He takes her for walks to the park and around the block in her wheelchair, expresses her bladder, provides comfy beds for her in their condo, and, of course, captures her on camera for all the world to enjoy. Unconditional love – and lots of reasons to smile – are rich reward for his efforts.

Scott remarked that Grace had two speeds: “Laying down or galloping.” That was before Grace tore her rear cranial cruciate ligament (CCL) about seven years ago. Up until then, Scott used to do a two-mile circuit with Grace every night. She would race around the neighborhood, stopping at her favorite yards to take a rest, until she was ready to charge around again. Neighborhood kids would come out to lie down on top of her, and adults would give her treats.
Grace was so fast that even Scott couldn’t keep up with her; he rode a mobility scooter, along with Coby, because otherwise they would have been left in the dust! But the torn CCL led to surgery, and then another torn CCL in her other leg happened just 11 weeks later. That repair did not heal well and required knee replacement, which resulted in a MRSA infection.

Scott and Jeanette spent the next year trying various antibiotics and joint flushes, but the infection could not be stopped and started to infiltrate Grace’s tibia. It was at that point that they decided to amputate her leg. Grace was eight years old with a lot of life ahead of her. “It was a hard decision because it was such a tremendous thing to do,” said Scott. “But at the same time it was an easy decision, because we either had to take the leg off, or she was going to die.”

Fortunately, the operation went well, and Grace adapted very quickly to being a tripod. In fact, she acted like very little had happened. She seemed to be in minimal discomfort, had no phantom pain, and was eager to resume her walks within a few days.

But in March 2016, Grace strained her right knee and was unable to stand without help. Therapy at a new rehab center, and a lifting support harness to help support Grace’s hind end made walking easier for her. But she had always been a very active dog, and now her walk consisted of going four houses down the street to her best friend’s house and then back home. Giving Grace her mobility back was of paramount importance to Scott and Jeanette. Grace’s 90-pound body might be slowing her down, but her spirit still wanted to run!
Scott tried to build a wheelchair for her from PVC piping, but figuring out how to provide the proper support for her hind leg proved problematic. After consulting with his veterinarian and doing some research, he purchased a dog wheelchair.

It took Grace several times to get used to it, but now she happily “trots down the street and back,” said Scott. “She’s slower than she was in her running days, but she gets very excited when her front harness is put on because then she knows she’s going for a walk in her wheelchair. I think it will extend her life just by giving her a reason to go on her walk. She still drags her rear leg most of the time at home, but she uses it to walk more often than she did. The rehab is also helping. I’m hoping that the wheelchair will help build her leg muscles up to the point that she will only need therapy once or twice a month.”

Camping is a favorite family activity that Grace still enjoys participating in, making the campsite rounds in her wheelchair. “People come out to ask why she’s in the wheelchair, and then they say things like how great we are to do that for her.” Scott is perplexed by their reaction. “She’s a member of my family! Why would we not do this?”

Disabled pets have more opportunities for a high quality, extended life these days because of loving families and more resources available to help keep them together. A snuggle, a nuzzle, those eyes that look right into your heart . . . it makes it all worthwhile.

See our Products section for wheelchairs and other helpful products for disabled pets.
Lisa G. Murray, is a freelance writer and Marketing/PR Director of www.HandicappedPets.com. She can be reached at (888) 253-0777 X135.

News from The Kennel Club of Palm Springs 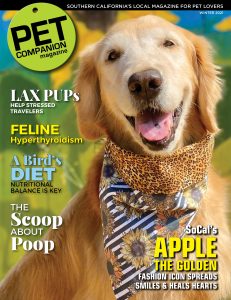 Mosquito Season is Upon Us! What is the risk to...