By replacing traditional beef and chicken protein with crickets, Jiminy’s is helping to save the planet while keeping your dog’s vital health needs in check. As a protein, crickets score above 80 in digestibility studies in dogs (qualifying crickets as high quality) and are free from common pathogens that plague the meat industry. Understanding the benefits of a cricket-based diet will certainly help banish our fears of feeding insects to our dogs, won’t it? Yes, says Anne Carlson, the mastermind behind Jiminy’s. Her personal story is deeply intertwined in this amazing company.

Carlson’s background was in business, so entering the pet food industry was a diversification of her previous portfolio of work. When asked what inspired her to enter the market, Anne replied, “First off, never dive into the water without checking first! My inspiration for Jiminy’s came directly from my daughter. She wasn’t sure she wanted to have children because of the worsening environment. This hit me hard, as I’d love to have a grandchild someday. It prompted me to look closely at the pet industry to see how we could do better. Despite the hundreds of foods and treats on the market, none of them addressed sustainability and climate change. These are the two biggest problems facing the planet, and they threaten our survival. I knew right away this is the path the pet industry absolutely needs to follow. Luckily, I have the right skill set to get in front and, hopefully, illustrate one way we can go.”

With her passion to be eco-conscious in mind, Anne set out to change the industry. She was pitched the idea to create a pet food brand with grass-raised beef; but, while it did promise more sustainability, Anne wanted to take it a step further. “I countered with the idea of using cricket protein and laid out the numbers on how the planet’s going in a bad direction to make my case. My partner Bill saw the light, and we’ve been moving forward ever since.” But just how exactly did crickets end up on her radar? It’s not the most likely ingredient you’d expect to find in dog food! Turns out, crickets are actually a brilliant solution to both a global environmental problem and canine health.

“The world’s population is projected to go from 7 billion to 9.7 billion by 2050. That’s 2.7 billion more people in a relatively short amount of time, and we’re already straining our land and water resources,” Carlson explained. “How are we going to produce all the protein needed to sustain so many people? I saw a United Nations study suggesting the use of insects as a solution to world hunger. Well, that’s where I wanted to end up! I researched cricket protein and learned that it’s low-calorie and protein-rich (more protein per gram than beef), has a complete amino acid profile, and is prebiotic and very humane. It also contains important minerals, like iron, zinc and magnesium. Several of these benefits are unique to cricket protein, and the whole package couldn’t be more perfect. It’s a superfood. Using cricket protein would not only be sustainable and fight climate change, but we could offer more to pet owners looking for better nutrition in their pet’s food. In the United States alone, dogs consume more than 32 billion pounds of protein each year. Clearly, the time for sustainability is now.”

Another benefit of cricket protein is that it’s hypoallergenic. Many dogs in the United States suffer from allergies to proteins, including chicken, beef, dairy, and eggs. In fact, 10 percent of all dog allergies are related to food. These food allergies can cause symptoms like chronic ear inflammation, gastrointestinal problems, chronic diarrhea and gas, itchy feet, and more. Recent studies have shown that cricket protein does not spark a reaction in the immune system and therefore won’t cause adverse allergic reactions.

And crickets are a renewable commodity. “The smaller the animal, the less land and water it needs, so it’s more sustainable,” says Carlson. “When you compare a 6 oz bag of beef treats to a 6 oz bag of Jiminy’s cricket protein treats, one bag of Jiminy’s saves 220 gallons of water. Switching your dog from a chicken-based diet to Jiminy’s insect protein food saves 480,000 gallons of water a year. Crickets don’t require acres of grassland, and a cricket barn is self-contained so you’re also avoiding the contamination of precious groundwater.” Cricket barns can be operated anywhere, even in an urban environment, so they are a good way to make eco-friendly use of even the most populated and industrial areas.

From an entrepreneurial perspective, Jiminy’s is a great case study on making dreams a reality. In her many years in the business arena, Carlson says the greatest lesson she learned was embracing flexibility. “Every company gets surprised all the time. Deliveries are delayed, the warehouse is flooded, etc. For a start-up, surprises are more the norm than the exception. For a start-up introducing a groundbreaking product, the whole enterprise from top to bottom is a surprise. A lot of the time, we’re in unknown territory and our best friend is flexibility. For example, we wanted our first soft & chewy treat to be called Peas & Carrots and had our manufacturer make a batch for testing. Our recipe had other ingredients like sweet potato, but Peas & Carrots would be front and center. It’s a fun name. Unfortunately, in mixing the batch together, they forgot to include the carrots! We sent the batch out for palatability testing anyway and it scored 100% on the test, meaning every dog liked and ate the treat. You can’t do any better than that, so goodbye carrots! We renamed the treat “Sweet Potato & Peas” and it became our best seller. By being flexible, we were able to take advantage of a mistake.” 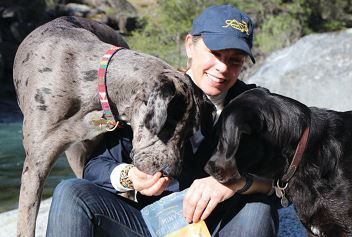 But of course, no company is complete without a consumer to purchase the products. And what do people think of feeding their dog crickets? “For a lot of people, they’ve been exposed to consuming crickets either through a novelty (think chocolate-covered ants) or at a reptile house, which can be pretty funky if they’re not keeping it clean,” replies Carlson. “There’s a preconceived notion that we have to overcome. The best way to do that is to show the treat to customers so they can see that it looks like any other treat. If they then take a sniff, they’ll find the biscuits have a pleasant nutty scent, while the soft and chewy versions smell like jerky. Both are very familiar scents, which can mean a lot to a pet owner who is wary of this new protein. Other consumers, such as vegetarians, environmentalists, or those with a dog suffering from allergies, are eager to give us a try. They have real concerns for their pet, and Jiminy’s offers a novel solution to these problems. Their feedback can be very warm and it’s heartening to know we can help.”

Carlson’s own dogs play a big role in the business—some of her best motivation comes from the four-legged family members waiting at home. “I have two—Tuco and Timber— and they’re all over Jiminy’s website and literature and on an Instagram page I created for them,” she says. “Tuco’s a black lab mix, and he’s a funny collection of parts. He’s small, but he has big ears, a long tail, delicate feet—and a long, long tongue! When it’s hanging down, it looks like he’s wearing a tie. Timber is a merle Great Dane. He’s over a year and a half old, but he’s still literally bouncy. He’s sleek, super athletic, and full of energy. Funny thing is, Timber likes to swim as much as Tuco—we have some underwater GoPro video of him swimming in a river. It’s like backcountry swimming with the seals when he paddles next to you!” When asked what the pups think about Jiminy’s brand, Anne happily reports, “Tuco literally leaps up and down when I’m bringing him his bowl of food. I feed him Jiminy’s, of course, but to be honest he jumped up and down when I fed him other foods in the past. Food’s his hobby! Timber has eaten insect protein from day one. If you want to see the effects of an insect-protein diet, he’s the perfect advertisement. He gallops like a horse and doesn’t quit. He’s the third Great Dane I’ve had, and he’s in a whole other category athletically from my other pups—he’s a canine LeBron James!”

For those that are already loving cricket-based dog food, there is exciting news on the horizon for Jiminy’s. Having started with just three biscuit treats and then expanded to food, Jiminy’s has now added a new protein to the mix … grubs! Carlson says, “Good Grub is a shift for us, as we’re using grubs (black soldier fly larvae) as the protein. It’s even more sustainable than cricket. We’re about to introduce a third soft and chewy treat—Peanut Butter & Cranberry flavor—but the twist is, we’ll be using grubs as its protein!” And now that we know insects are sustainable and a safe source of protein that dogs love, maybe we can move past the “ick” factor. Bring on the grubs!

Previous articleBoozehounds Set to Open in Palm Springs
Next articlePlanning a Trip?