There’s a place in San Diego where magic happens when homeless veterans take up residence with homeless shelter dogs—and both share a passion for living a life of service. This place is Cammies & Canines, a 289-acre sanctuary where veterans train rescued shelter dogs to become service dogs. On this land, dreams are restored as love and companionship fill the void where loss and loneliness used to be.

Arih and Bas, our cover dogs, play an integral role at Cammies & Canines, along with their two buddies, Hero and Charlie. Bas belongs to founder and CEO Kalani Creutzburg, a 12-year Marine veteran who started the organization in 2016. Arih, Hero, and Charlie belong to professional dog trainer Nate Schoemer, one of the stars of the Animal Planet show Rescue Dog to Super Dog, who is also a Marine veteran. Nate is the founder of Hira’s Legacy Dog Training, and he joined Cammies & Canines in 2017. “I often use my dogs to demonstrate training techniques to the veterans in our program,” revealed Nate. 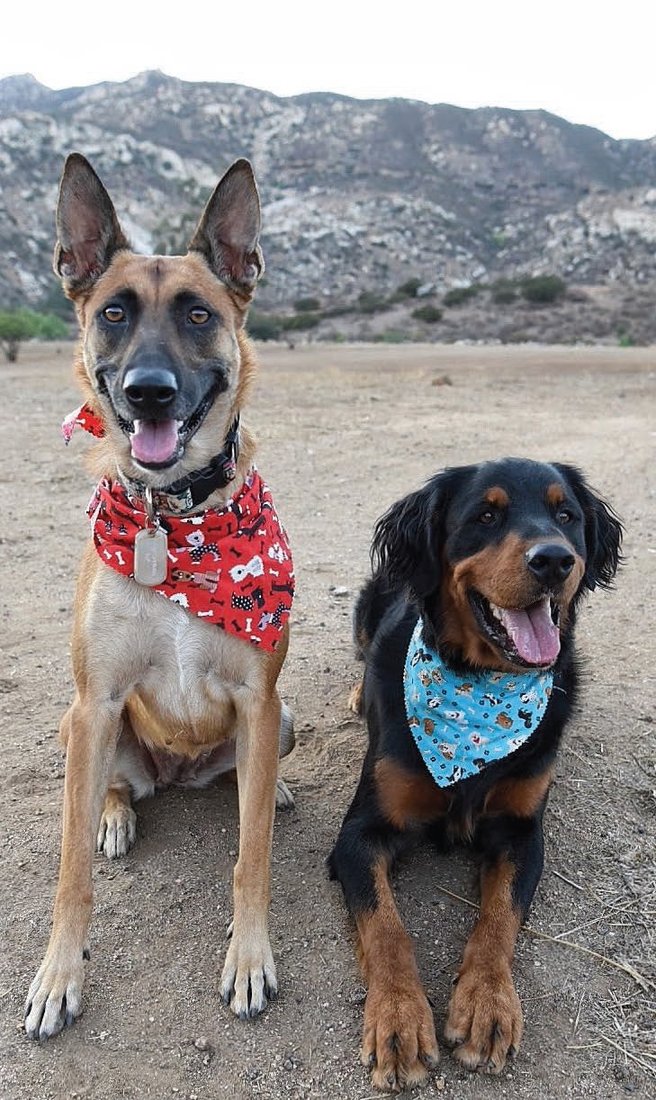 Cover dogs Arih (left) and Bas (right) work hard to help out the Cammies & Canines team, but they always know how to stop and smile big for the camera.

It was in 2017 that Kalani was featured on Rescue Dog to Super Dog, selected by the production company after six months of interviews, video conferences, and background and medical record checks. On that show, Kalani was gifted with his ser-vice dog Bas—which is short for Gunnery Sergeant Basilone, a legendary Marine who was awarded the Medal of Honor. Nate, who trained Bas (and then Kalani), says he chose Bas from the Seal Beach Animal Shelter “because of his playfulness and ability to stop and cuddle on demand when needed.” He explained, “Bas was perfect for a guy coping with manic depression.” 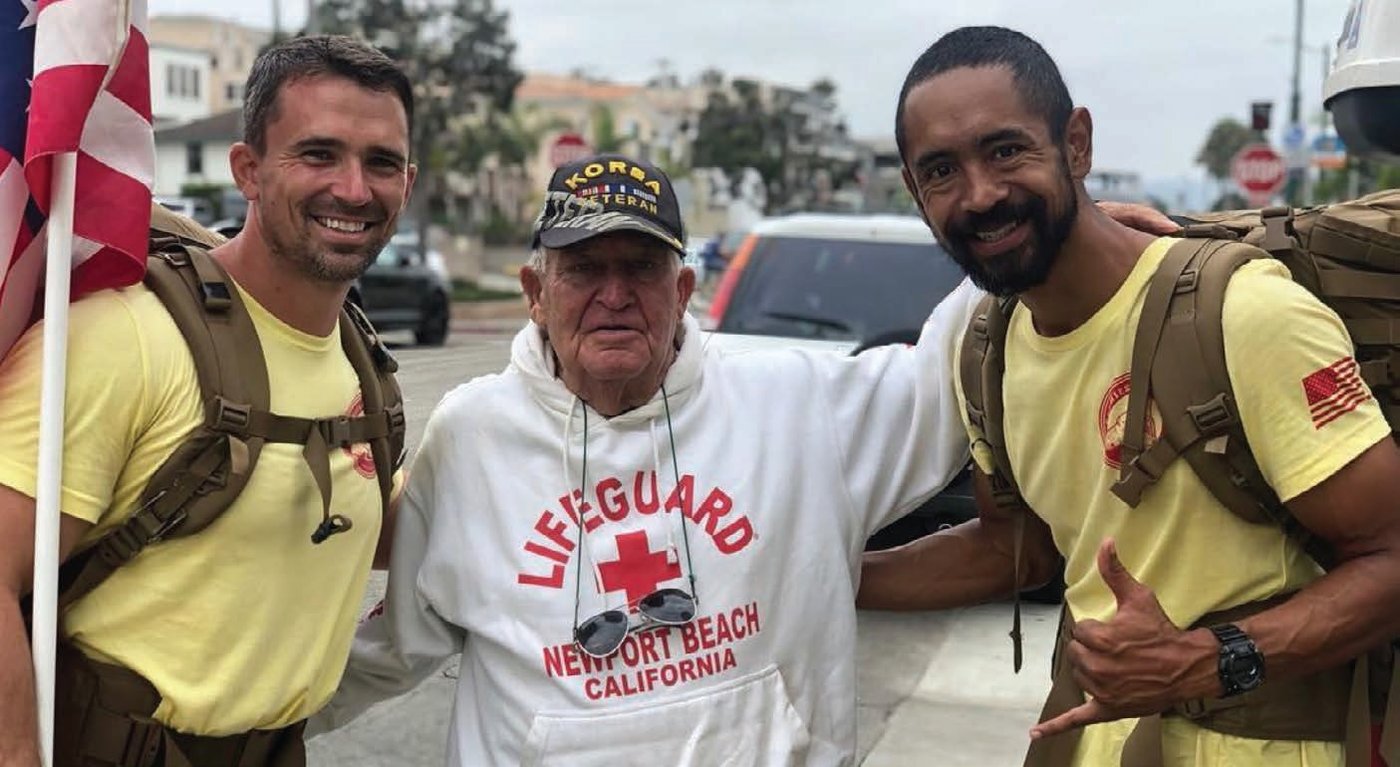 It’s not every day you meet a Korean War veteran, but during the Cammies & Canines 215-mile fundraising hike, Kalani Creutzburg (right) and Nate Schoemer (left) were honored by his presence and support.

You see, Kalani knows firsthand what the veterans in his program are going through, because he, too, has struggled with homelessness and thoughts of suicide. Bas is an important part of his journey to overcome his depression, and that’s thanks to the training Bas and Kalani received from Nate, who worked for months to prepare Bas to become a service dog. Nate studied and taught at The Tom Rose School, the elite dog trainer school in High Ridge, Missouri. He started his own company, Hira’s Legacy Dog Training, and after working with Kalani and Bas on the show, joined the effort at Cammies & Canines. 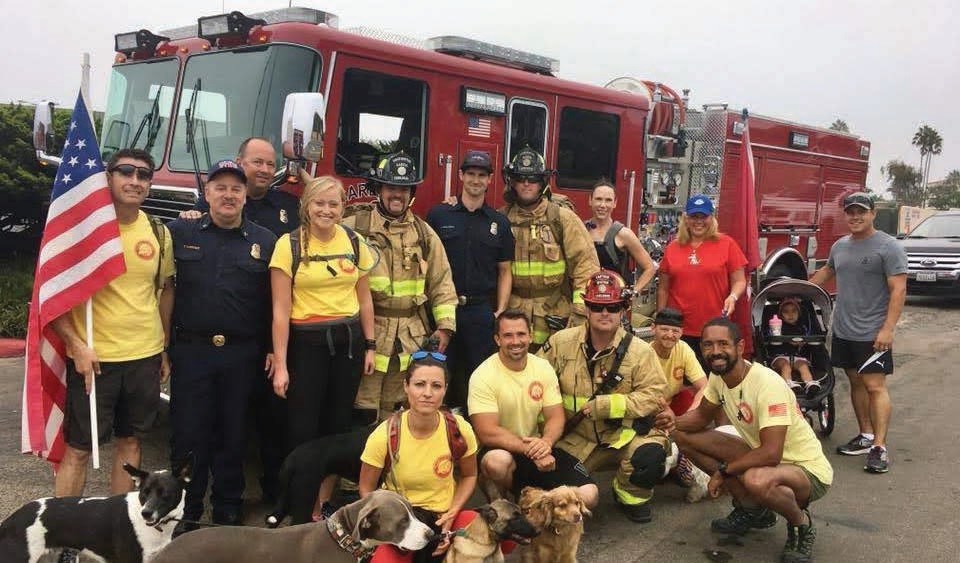 Day 7 of the Cammies & Canines 11-day, 215-mile fundraising hike. The team couldn’t miss out on this photo opportunity with the Orange County Fire Department, a group so dedicated and supportive of their mission.

“There are a lot of parallels between homeless veterans and rescue dogs,” Kalani told us. “In both cases, it’s as if society has given up on them. At Cammies & Canines, we pride ourselves on being able to work with two demographics in a way that nobody else does. To date, we’ve made a massive impact on our community, helping many transitioning veterans find healing and moving them from homelessness to being employable again!”

Kalani Creutzburg understands the hard work and dedication it takes to pay it forward to our veterans. But you can’t resist a good break time with your best friend!

And how does Cammies & Canines find their veterans? “We literally walk the trenches, the alleys, and the canyons of San Diego every week, talking to the homeless community,” said Kalani. “They know who we are, but in case they don’t, we wear bright yellow shirts. For those who are veterans and actually want help, we go out of our way to end their homelessness on the spot. In addition to our seeking them out, homeless veterans are referred to us by other programs, for which we are very grateful.” 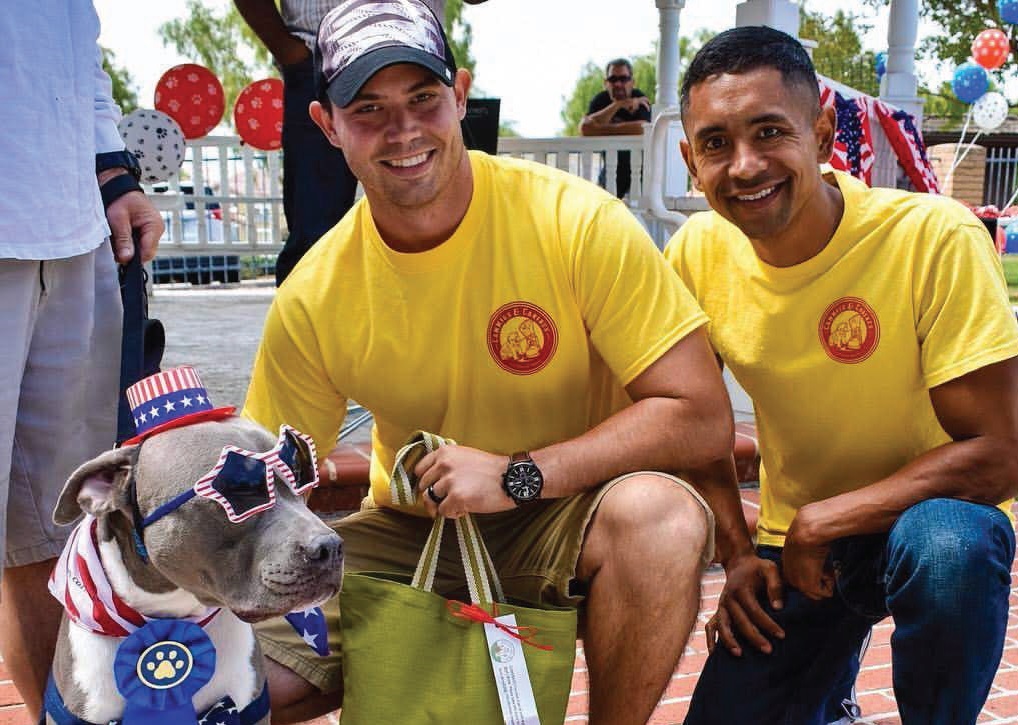 Kalani will tell you that dogs provide unconditional love and, for veterans, that love fills a void and provides purpose. Caring for the dogs demands a lot of responsibility, and their well-being is always a priority at Cammies & Canines. Kalani reports that, “With supervision, we empower and train our veterans to coexist with their dog. Once we’ve thoroughly assessed the veteran, we actually empower him to rescue a dog from the shelter … specifically, a dog that’s on the verge of being euthanized. This way we accomplish two things: saving dogs from being euthanized and creating a deep sense of connection and purpose for our veteran!”

“The canine portion, however, is actually one piece of our healing approach,” he explained. “The first (and major piece) is our peer-to-peer support group, where we sit in a circle and address deep emotional issues that our resident veterans face. After letting go of all the negativity, a kind of void is created that is then filled in with canine companionship.”

Kalani is proud of all the veterans who have come through his program. He recounts the story of one Army Vietnam veteran who had been living in his car with his dog for a year. “One of our amazing volunteers learned of his situation, and we immediately dispatched a team to help him. He’s now a contributing member of our community, living with a roof over his head, his own bed with clean linens, hot running water for showers, and a bathroom—not to mention epic views! He enjoys three meals a day and a regular peer-to-peer support group, and he helps with all the animals—yes, we have more than dogs!”

Kalani says the singular goal of Cammies & Canines is “getting our homeless veterans off the streets.” To that end, he explains, “We’ve grown to 20 bed spaces and will soon introduce horticultural therapy and hosting contractors who will train residents on various trade skills to prepare them for future careers.” 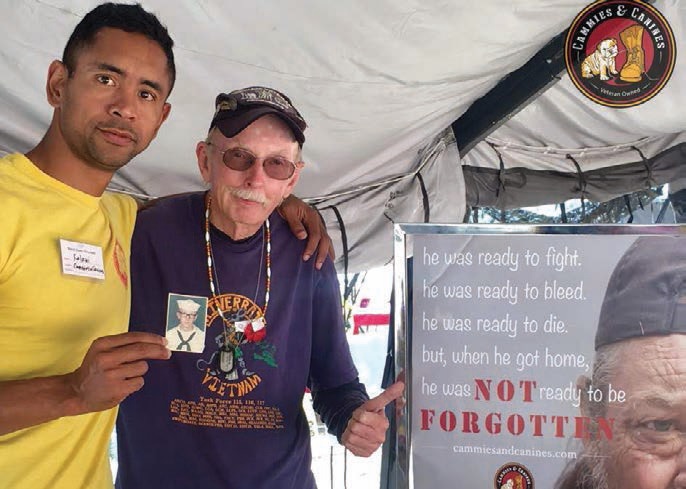 Kalani Creutzburg (left) had the honor of meeting this homeless Vietnam veteran. Creutzburg deemed him an angel from above, despite the struggles he encountered.

Back when Kalani was facing homelessness himself, he desperately missed his two beloved dogs, whom he’d lost through divorce. It struck him that his dogs truly had the power to help him heal, and he started thinking about how other veterans could benefit from that kind of healing, too. After persevering through his own struggles, Kalani founded Cammies & Canines to introduce other homeless veterans to the canine companionship that he once so desperately needed himself. 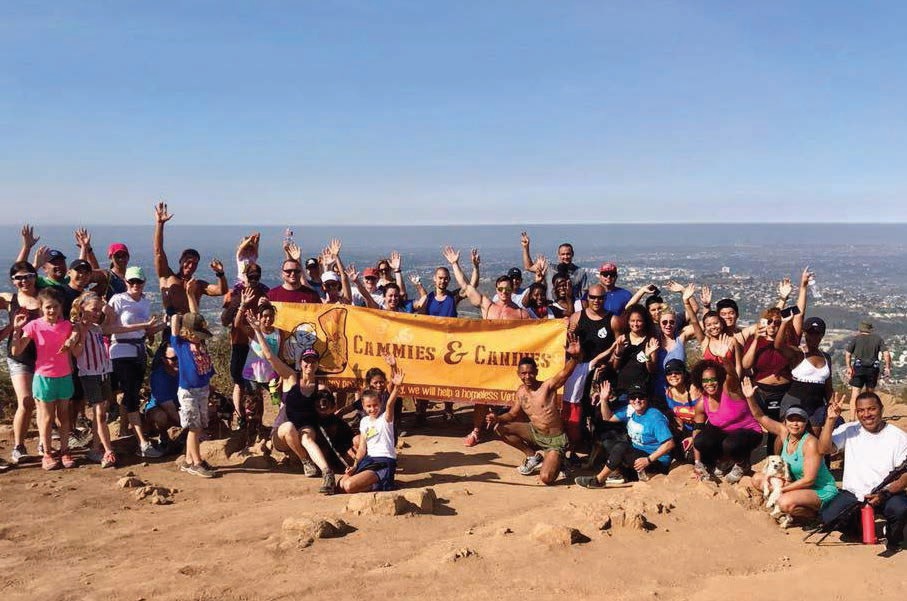 The Cammies & Canines Tribe celebrating the Fourth of July the best way they know how—by hiking Cowles Mountain and sharing their patriotic love.
Previous articleSure Petcare’s ANIMO Provides a Greater Understanding of Your Dog’s Behavior and Well-Being
Next articleMayor Max Winter In Idyllwild