“Best Dog Park in the USA”

One of the things I love most about living in San Diego is our high score on the dog-friendly meter. Many of our restaurants have outdoor patios where four-legged family members are welcome, and we enjoy an array of beautiful leash-free dog parks where we can take our dogs to run, play, and socialize.

Standing out among them all, however, is our pride and joy, a dog’s—as well as a dog owner’s—paradise, Fiesta Island. I discovered this gem in about 2004 with my new boxer puppy, Bella. We could walk for hours, or swim, or just relax on the sand, and, when her energy level was at its peak, I would bicycle with her running beside me within the enormous fenced portion of the island. During my pregnancy, she and I walked there daily, and once my son was born, we continued our tradition with my baby strapped on. By the time Bella went to heaven, Fiesta Island had become a staple of daily life. Once I’d mourned and was finally ready to welcome home Zephyr, a Doberman puppy, Fiesta again became our go-to outing each day. I had developed quite an emotional bond with this place that had seen me through a marriage, a pregnancy, the birth of my child, a divorce, saying goodbye to a dog, and plenty more of the never-ending tumultuous events life throws at us. Coming to Fiesta Island had become my therapy, my solace.

The sprawling leash-free island in Mission Bay was named “Best Dog Park in the USA” by USAToday website 10best.com, and for good reason. Almost all the near 500 acres are leash-free and offer many diverse types of terrain to explore, as well as various social climates to fit just about any dog’s personality. Miles of sandy beaches encompass the island, where water-loving dogs can swim in the calm bay year-round. For owners that prefer to keep their doggies more secure, the massive 90-acre fenced area (complete with tons of parking), specifically designated as an off-leash dog exercise area, contains a maze of trails, as well as its own far-reaching stretch of sandy beach. Several water bowls are set out, filled regularly by thoughtful regular visitors, and picnic tables provide a meeting place for those who enjoy gathering and socializing, both human and canine. Owners with a pup who prefers not to play with other dogs (such as my Zephyr) can choose to wander in blissful isolation through the tranquil desert landscape of the island’s interior, which I’ve found to be the least populated section. Its trails wind though a bonanza of native vegetation, giving the feeling of being transported out of the city and to another place entirely.

I’ve noticed that the more room dogs have, the more they are able to respect each others’ space, which in turn leads to greater overall peace among pups. The social butterflies can play and the loners have space to be solitary with their owners. Both inside or outside of the fenced exercise area, there is so much space that every dog and human has the option to either interact with others or keep to themselves. Fiesta Island is the only designated leash-free area in the city where there is more than enough room for this unique dynamic. But the future of the island, especially its wild nature, was touch and go for some time.

I remember, right around the time my son was born in early 2007, noticing signs calling us to “Save Fiesta Island,” and a group calling themselves FIDO (Fiesta Island Dog Owners … clever!) was trying to fight potential development within the fenced off-leash area, calling for backup from anyone willing to help. I did some research and learned that plans had been presented by the city that would put the exercise area at risk of being divided by a large road. The plans also called for adding such “improvements” as parking lots, a playground, and an ampitheatre—vastly depleting its acreage, not to mention taking a huge toll on the untamed feel that is a large part of its allure. I felt an ache in my heart at the idea of this rare, native open space being developed into another planned city park, so I immediately joined FIDO’s mailing list and did my small part to wage the fight to keep it wild. I began volunteering for events, donating, and helping out in other small ways, despondent at the idea of the island losing its unique flavor. So who is FIDO? Well first, a bit of history.

In 1972, Dog Beach in Ocean Beach (another terrific doggie playground) and Fiesta Island were ordained the only two off-leash beaches in the City of San Diego, banning dogs from running free on every other beach within the city limits, where they had previously been allowed. At that time, Fiesta Island was, for the most part, unused by the public. Once this law came into effect, people began to discover the benefit of a space expansive enough for both dogs and their humans to exercise together, running, biking, etc., and its popularity quickly grew.

When the city submitted plans in 2006 that would drastically alter the use of the fenced dog exercise area on Fiesta Island, a small group of people recognized the devastating threat to this now well-used and much-loved spot, and quickly formed the group FIDO, rolling up their sleeves and preparing to do whatever they could to preserve this natural, unique oasis in the city.

It didn’t take long for FIDO to quickly gain momentum and manpower. Dog owners showed up in force to join the fight to maintain the current use of the 90-acre dog exercise area. It was a battle that would go on for years, with FIDO representatives speaking at city planning meetings, meeting with the mayor and San Diego City Council, and advocating passionately for leaving this area as is, open and undeveloped. FIDO spoke out on behalf of the nearly 800,000 dogs who live in San Diego County and the countless more who visit every year, fervently attempting to persuade City Council that San Diego—no, all of Southern California—would suffer a huge loss if the city went ahead with the proposed plans. One statement summed up their argument: “As an open landscape, Fiesta Island should be the place where city residents and visitors alike find the ultimate refuge from urban congestion, noise, and visual clutter.”

FIDO submitted plans of their own— Option B to counter the city’s Option A—and, in a suspenseful climax on June 17, 2019, the City Council finally voted for Option B, recognizing FIDO’s efforts and rewarding us all with the decision to leave the 90-acre fenced area joyously leash-free and the magnificently wild exercise area intact. Two years later, in June 2021, the decision was also passed by the Coastal Commission, firmly protecting the cherished retreat from being paved over.

The years-long battle had been won; FIDO had succeeded in keeping Fiesta Island the way I and thousands of others have known and loved it for years: a place where dogs can run, mingle, investigate, explore, play, and be dogs.

Enthusiastic congratulations and the most heartfelt thanks to every member of FIDO, for fighting so hard for our dogs’ enjoyment and saving this unparalleled land. FIDO is now committed to being ongoing stewards of the island. Organizing beach cleanups, planning removal of hazardous foxtails, and keeping existing trails safe and accessible are just a few things on the list, now that the biggest obstacle has been overcome.

Directions to the Fenced Off-Leash Dog Area on Fiesta Island

Once on Fiesta Island:

As you drive along the east shore of the island, you will come to a Y in the road; stay to the left, continuing to the west side of the island, being careful to yield at the merge. (Many cyclists use the island as well.) The fenced area starts ahead on the right side with plenty of parking, a double gate access and access directly to the beach! If you continue on Fiesta Island Road, there are multiple gates through the fence, disabled parking and gate, porta-potties, and at the south end of the fence another access directly to the beach.
Source: fidosd.com

Some important items to bring along when you visit Fiesta Island include:

For more information, or to join FIDO, visit FIDOSD.com. Find us on Facebook at FIDO – Fiesta Island Dog Owners, and Instagram @fido.sandiego. 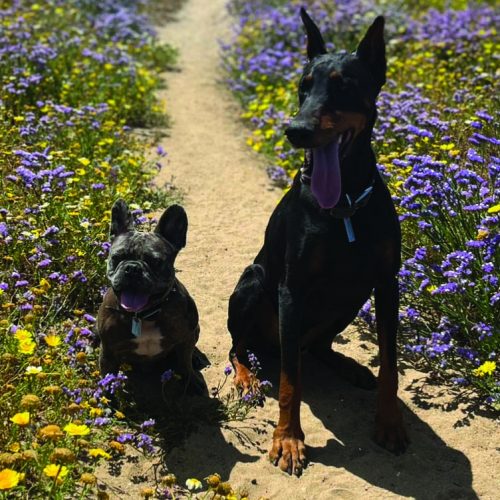