Elizabethan Collars: What The H#$* Is My Veterinarian Thinking?

If you are a pet owner, you are likely familiar with Elizabethan collars (e-collar for short). More commonly referred to as “cone of shame” in pop culture, these plastic devices can be quite the source of contention and frustration between veterinarians and pet owners. But why? Why would a doctor of veterinary medicine prescribe an e-collar, and why does everyone else speak of them in hushed tones? Where did this term “cone of shame” even come from? (Personally, I like to think of it as “cone of responsibility” or “cone of I’d like to play it smart and prevent myself from having to bring my pet back in to repair the incision he chewed open and now have another vet bill.”).

The negative feelings surrounding e-collars probably stems from a few sources: 1) language and communication (i.e., referring to them as cones of shame), 2) lack of awareness of complications that can arise if not utilized properly, 3) period of transition and adaptation for pet while navigating wearing the e-collar. The rest of this article aims to resolve some of the misunderstanding of Elizabethan collars, shed light on the veterinarian perspective on why they are useful, and offer some tips to reduce your headache!

Historically, Elizabethan collars first came into widespread use by veterinary professionals in the early 1960s. A patent for the device appears in 1959, filed by Frank L. Johnson. Other sources refer to another possible inventor, Ed Schilling. Regardless of who invented them, the term “Elizabethan collar” refers to an even earlier historical piece of attire worn by people during the time of Queen Elizabeth I and considered quite fashionable. So the next time your pet’s doctor recommends wearing a cone, you can just imagine Bella or Luna as a burgeoning fashionista!

The term “Elizabethan collar” refers to a historical piece of attire worn by people during the time of Queen Elizabeth I and considered quite fashionable.

Not only are e-collars potentially fashionable, they are medically smart. Their purpose is to act as a mechanical, or physical, barrier to prevent self-trauma. When pets have something on their body that itches, hurts, or is bothersome, their instinct will be to either scratch or bite at that part of their body. Surgery, even when done by a licensed veterinary professional, is still creating a cut through the skin that will prompt an inflammatory response. Although part of the healing process, this inflammation will result in pain and sometimes itching.

As a doctor, I am going to prescribe medications to alleviate that pain and itch—but I am also going to strongly recommend an e-collar. Because even if the pain and itch is completely controlled by the medications I prescribe, a dog or cat may still lick or chew an incision while grooming or doing other normal behaviors. If that incision extends into the abdomen (as with every spay surgery), you can imagine the headache and potential life-threatening complications that could happen if an animal opens up their incision. Not only will that create risk for infection or tissue damage, but it will require a second procedure to repair the mess. Unfortunately, I have seen several owners learn this lesson the hard way!

So if these devices are medically sound, why do owners eschew them? Common complaints include: “My pet won’t eat with it on.” “Max keeps bumping into things with that cone!” “She’s just not acting like herself.” In many of these cases, a little time and patience are helpful. Remember, the e-collar is keeping your pet from opening up their incision or traumatizing their skin further. If Fluffy is having a hard time getting to the food dish, try placing it directly under their face or adjusting how you typically feed her. If objects are getting bumped into, it might be helpful to move them or confine your pet to a more suitable part of the house. I caution owners against the inflatable “donut” collars because the dog or cat can often still reach parts of their body, and I have also seen a pet that opened its incision after the donut deflated! If Stella seems a little different regarding her behavior, give it some time. Most pets adapt well to their collar after 1 to 2 days. This is a temporary device. Stay focused on the goal. Think of them as “cones of responsibility.” Remember, play it smart and prevent having to bring your pet back into the vet to repair the incision he chewed open and have a bigger headache! 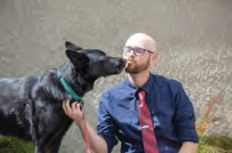 It Only Takes a Minute to Chew or Lick through Stitches

Those of you who have been our readers for years know that my dog Z often “helps” provide article topics. Snake encounters, spider bites, ingesting foreign objects, competing in obedience trials, getting hit by a car, training hiccups, allergies, food intolerances, and running through plate-glass patio doors are just a few of the articles we’ve included in past issues to warn other unsuspecting dog owners of the havoc one enthusiastic, accident-prone dog can wreak.

But this issue produced an unexpected addition to Z’s list of helpful articles. In Dr. Forney’s revealing article about the importance of consistent use of the cone when prescribed, I was surprised (okay, horrified) to realize that one of the images the good doctor included with his article was of Z. In the “what-not-to-do” category! Unbeknownst to him, Dr. Forney had sent in a prime photographic example of the damage that can be done when you take your eyes off a dog who is being trusted not to wear his cone because you’re “watching” him. The photo shows the wounds that Z opened up in a split second (roughly) when his cone was off.

Now, with all of the times Z has had to wear a cone, you’d think I’d be on high alert every second. But it happens, even to the most experienced dog owners, because it literally can take only seconds for a dog to lick or chew their way through their stitches. Keep that cone on (especially if you have to take your eyes off your pet for a minute). Lesson (re) learned!