The most common bone tumor found in dogs is called osteosarcoma (OSA). This bone tumor develops eight times more often in canines than in humans, and many physicians have viewed the treatment veterinarians apply to dogs with OSA to human medicine. OSA is primarily a disease that develops in middle-aged and senior dogs. However, while seven is the median age for developing canine OSA, in rare cases, these tumors have appeared in dogs as young as six months old. 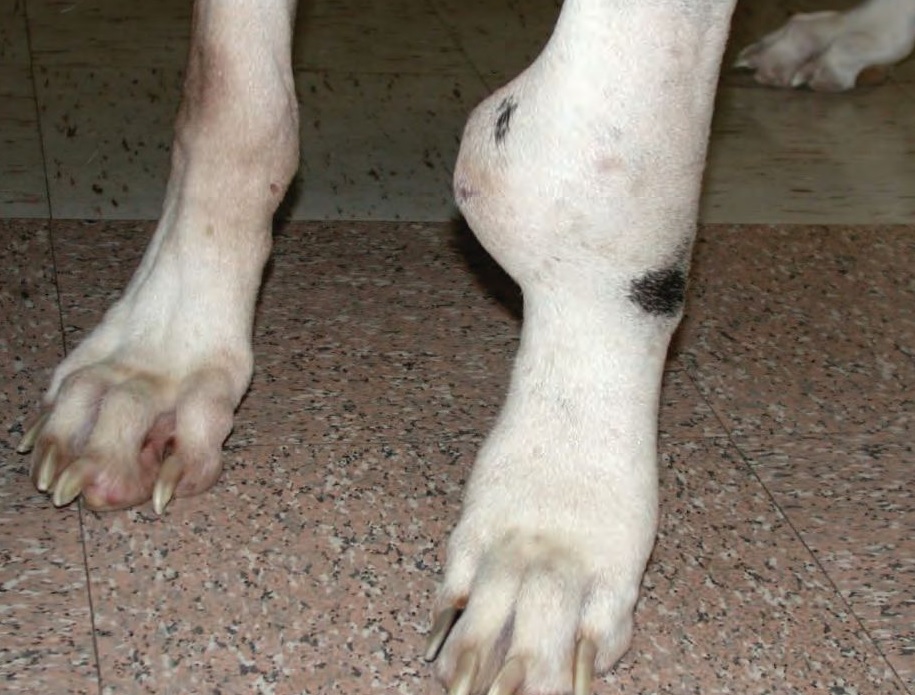 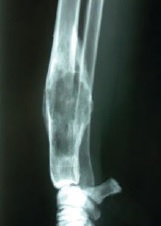 OSA tumors develop from primitive mesenchymal cells—cells that develop into connective tissue, blood vessels and lymphatic tissue. We differentiate these cells from other mesenchymal tumors by their production of osteoid, or unmineralized bone tissue, a marker that allows pathologists to make the diagnosis of OSA. Once the OSA tumor develops, pet owners typically notice some lameness in their dog, followed by swelling at the tumor site. These symptoms are commonly associated with a pet’s recent injury and frequently lead to a misdiagnosis of only a soft tissue injury or sprain.

The development of OSA is often found on weight-bearing bones, especially those near late-closing physeal (growth plate) areas on heavy dogs. Additionally, weight-bearing bones with past fractures or other trauma are more susceptible to developing these tumors.

As with most dog tumors, OSA tumors can grow rapidly. In fact, some OSA tumors in dogs have reportedly doubled in size in just about two days. Compare this to breast tumors in women, which a have an average doubling time of 146 days.

A dog’s body weight is the single strongest predictor for whether they are at risk for OSA. Almost a third of the dogs that develop OSA weigh 88 pounds or more. In contrast, only 5% of the dogs with OSA weigh less than 33 pounds. As you might suspect, the following breeds have the highest risk for OSA: Saint Bernards, Great Danes, Irish setters, Doberman pinchers, Rottweilers, German shepherds, and golden retrievers.

Over the span of a dog’s life, unaltered or sexually intact dogs are more likely to develop OSA than altered dogs. That said, we should caution that, for larger breeds, many veterinarians recommend waiting until your dog is one year of age or has its full skeletal development before it is spayed or neutered.

What role do genetics play in the development of canine OSA? Many dogs with OSA have been found to have abnormalities in the tumor protein (TP) 53 gene. Medical biologists are currently researching other recently discovered genetic markers as well.

When OSA is discovered in the limb of a dog, amputation is often required. Unfortunately, surgical removal is not sufficient to ensure your dog’s survival. Dogs that have limb amputation with no other treatment have only a 5% to 10% chance of living a year past their surgery. Dogs that are not treated with chemotherapy in conjunction with the removal of their OSA have less than a 5% chance of living beyond two years of treatment. In contrast, when canine patients receive drug therapy in addition to amputation, their survival beyond a year increases to 50%. Clearly, we have more work to do in both human and veterinary oncology to change these percentages.

Limb amputation is well tolerated in most dogs, especially if they are already lame and not putting weight on the impacted leg. It offers immediate pain relief associated with the tumor, and most pet owners report their dogs have the same or nearly the same ability to get around post-surgery as they did before amputation.

For patients with serious joint disease, limb-sparing surgery (LSS) is an option. However, this option is usually only available at a few university centers with bone banks. Alternate therapies, including small molecular inhibitors and immunotherapy, are currently in trials. We hope these new treatments will help us diagnose OSA earlier, which significantly improves our ability to treat this dangerous disease.

What Signs Should I Look For in My Dog?

At first, osteosarcoma will usually present as intermittent lameness, due to pain that comes and goes. The pain may subside with standard doses of pain killers, but usually only for a week or so. It’s important to watch for these signs that may signal osteosarcoma:

▘Where it presents in the limbs, a dog will experience pain/lameness that doesn’t go away, along with swelling of an affected limb that is painful, red, and hot to the touch.

▘Tumors on or along the spine will cause neurological problems, such as seizures or difficulty walking.

▘A tumor situated in the jaw will make eating painful for the dog, so he may appear to have no appetite.

▘Tumors on a dog’s ribs will cause noticeable breathing difficulties.

▘In the skull, jaw, or ribs, a swollen area or a noticeable mass is often the first sign of a tumor.

▘When a tumor is present anywhere on the dog, it will usually cause loss of appetite and overall lethargy.

How is Osteosarcoma Diagnosed and Staged? 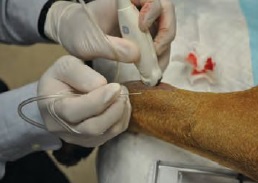 ▘Conduct a complete physical examination, blood tests, X-rays of swollen or painful areas as well as the chest, and a bone scan.

▘Perform a computed tomography (CT) scan to determine if cancer has spread (in 90–95% of dogs, the tumor will have already metastasized at the time of diagnosis).

▘Pain management is the primary goal of treatment, to ensure the best quality of life for patients.

▘Amputation may be performed in the case of a limb tumor.

▘Systemic therapy including chemotherapy or immunotherapy, along with local treatment of the primary tumor.

Previous articleThe Latest from The Kennel Club of Palm Springs
Next articleThe Chase Is Up!

Scourges of the Skin?