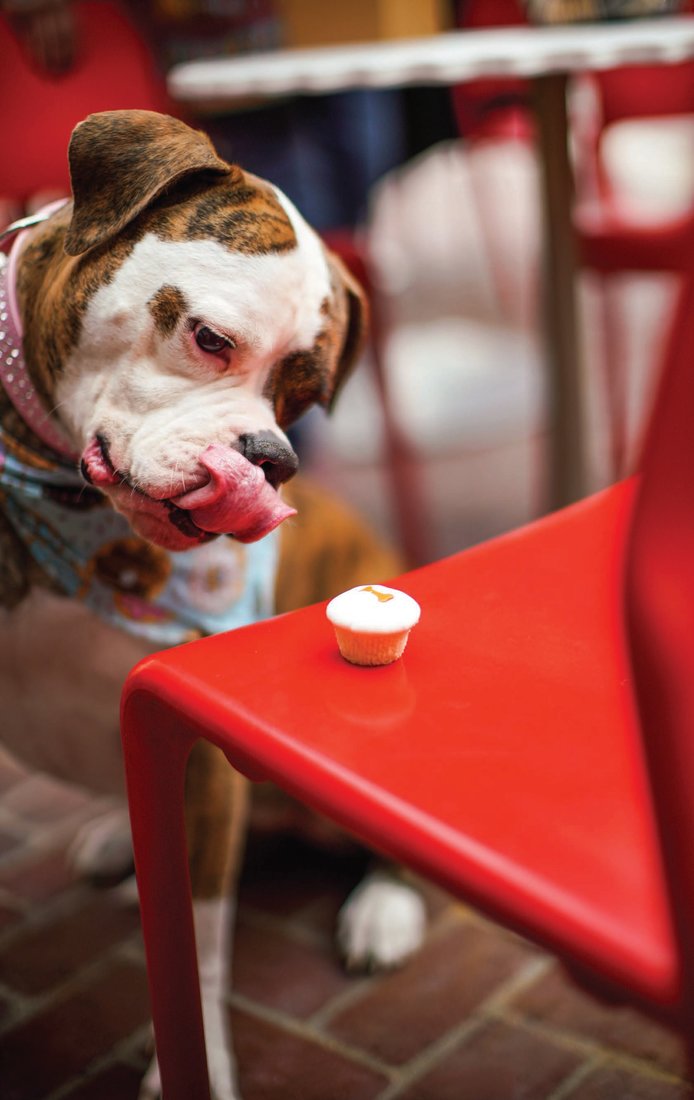 Humans aren’t the only ones who can enjoy the luxury of going out to eat—your pup can, too! If you’re anything like me, you want your fourlegged best friend with you when you go out. As our dogs become more and more integrated into everyday life, the landscape of Southern California’s businesses is changing to help accommodate this new mentality. A variety of pet-friendly and pet-oriented restaurants are popping up left and right. From rice bowls at Lazy Dog to “Pooch-inis” at Shake Shack, this is our guide to the best dog menus in town!

I first found myself at Lazy Dog many years ago with a good friend of mine. To my surprise, she’d brought her two husky mixes along to dinner. I lightheartedly asked if we were going to take the food to go and have a picnic somewhere with the dogs, to which my friend gleefully responded that Lazy Dog welcomes pets and even offers a dog menu!

Over the years, I’ve watched Lazy Dog rise from relative anonymity to become the staple pet-friendly hot spot in Southern California, encouraging other establishments to follow suit. Lazy Dog’s pup-tailored menu always includes a complimentary bowl of water, served alongside a grilled hamburger patty with brown rice, chicken with brown rice, or just plain brown rice for under $5. For its human patrons, Lazy Dog’s menu is broad, with something for everyone.

Dogs are welcome on the patio, but they must follow a few simple rules. Pups cannot eat from your plate (they get their own!), even the most well-trained critter must be on leash, and waiters cannot touch your dog. Also, as is customary when your furry best friend is with you in public, your dog cannot disturb, bark at, or get close enough to (heaven forbid!) bite other patrons.

Lazy Dog has locations all over Southern California, from San Diego to Santa Clarita. Hours vary by location, but the restaurant is generally open from 11 a.m. to 11 p.m. 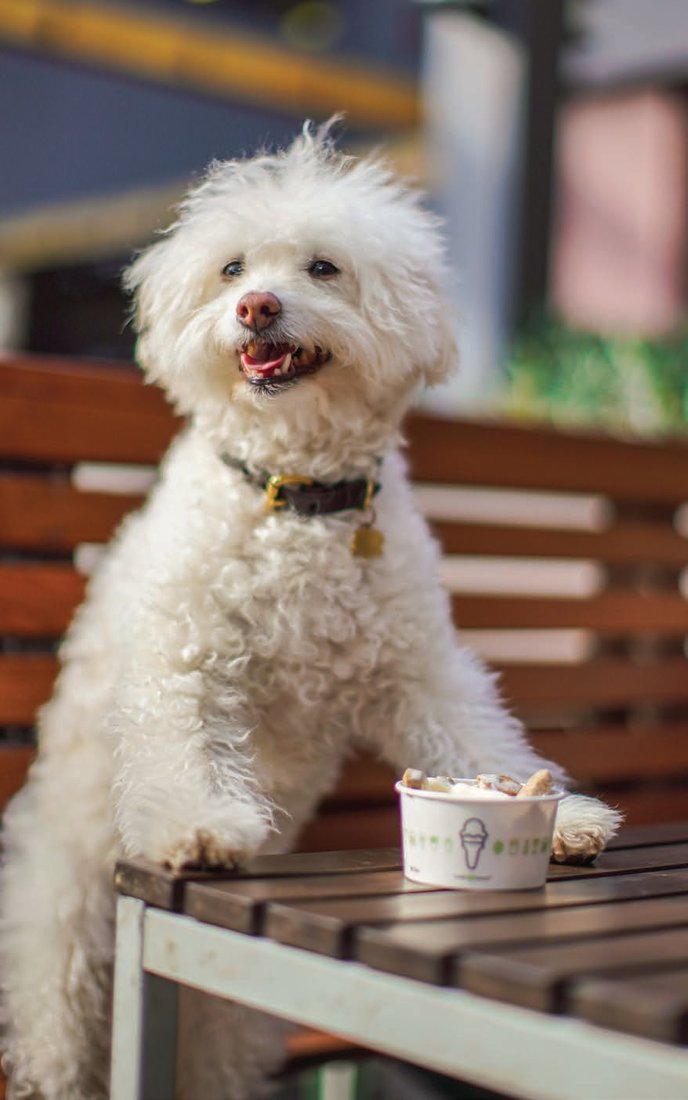 The “Woof Menu” at Shake Shack is a fan favorite in California, with likely the most unique menu options of all the restaurants on our list. Having partnered with Bocce’s Bakery, Shake Shack offers such mouthwatering choices as the “Bag O’ Bones” or the “Pooch-ini.” The Bag O’ Bones is a doggie bag of five ShackBurger dog biscuits, and the “Pooch-ini” is a sweet delight with a mix of dog biscuits, peanut butter sauce, and vanilla custard. The assortment is presented in such grand style that most dog owners will eye it with envy! Although they’re a bit pricier than at other restaurants, Shake Shack’s unique treats will deliciously satisfy your dog’s rumbling tummy.

While you enjoy your burger, it is important to keep in mind that Shake Shack states that the Pooch-ini, which includes dairy, sugar and nut products, is not intended for small dogs. The Bag O’ Bones, on the other hand, is safe for any dog.

Shake Shack has multiple locations, all usually open from 11 a.m. to 10 p.m. 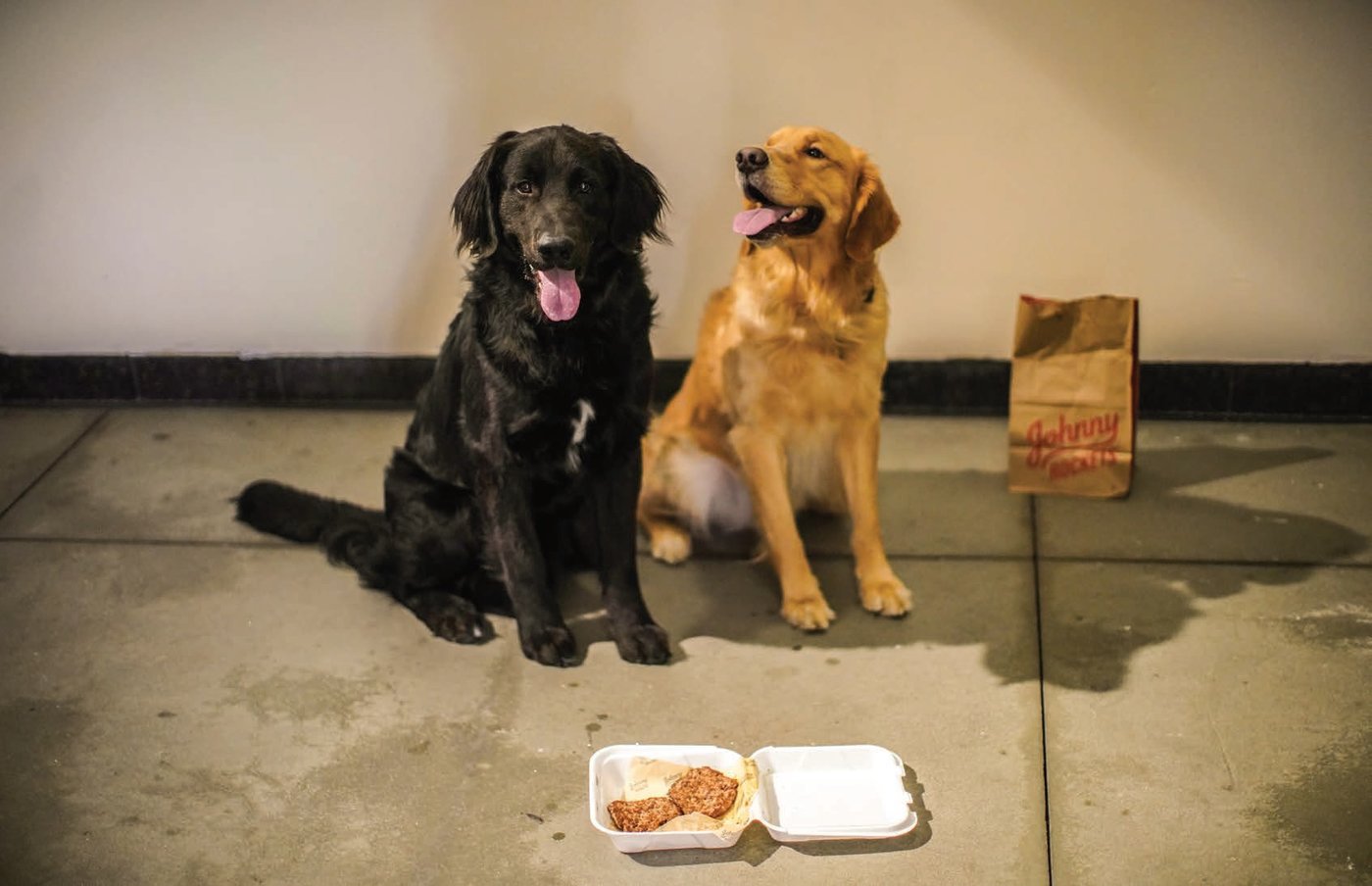 Everyone’s favorite 1950s diner-style restaurant chain now lets you enjoy the nostalgia with your four-legged companion. Although Johnny Rockets doesn’t offer a specific dog menu, there are plenty of options to share with your pup. If you and your dog sit in the outdoor patio areas, you can ask for an extra plate to split your meal or order a dog-portioned chopped burger patty with water.

Johnny Rockets is a popular chain restaurant that is traditionally open 11 a.m. to 9 p.m.

The Morrison is a Los Angeles gem, beloved by locals. Located in Atwater Village on Los Feliz Boulevard, The Morrison specializes in signature crafted burgers, sides, salads, drinks and desserts. Named #7 Best Restaurant in the United States by Yelp and Best Happy Hour by LA Weekly, it’s no wonder that The Morrison is consistently filled with the coolest of people.

What many don’t know about this unique establishment is that The Morrison has a pet-friendly patio, complete with a menu just for your pup. While you enjoy a signature Bloody Mary and Ramen Burger, your dog can choose from a selection of “Where’s the Beef?” (chopped hamburger patty with rice), “Cock-a-Doodle-Doo” (chicken with rice), and “Franenweinie” sausage.

For the rock star pups, Rock & Brews is the place to be! Founded by two members of the famous rock band KISS, Rock & Brews welcomes the rock-and-roll crowd with open arms. Rock & Brews serves up a variety of American classics, such as chili cheese fries, hot wings, submarine sandwiches, and five-cheese mac n cheese. Both dog and family friendly, there is a large open area perfect for all dogs.

It doesn’t matter if your furry companion has a tongue as long as Gene Simmons, he’ll find plenty to drool over in the tasty dog menu. The options feature chopped hamburger patties, hot dogs, grilled chicken breast, and bacon (because what dog doesn’t love bacon, right?). The staff are all big dog lovers that work hard to ensure that Rock & Brews is a safe and fun environment for every member of your family. 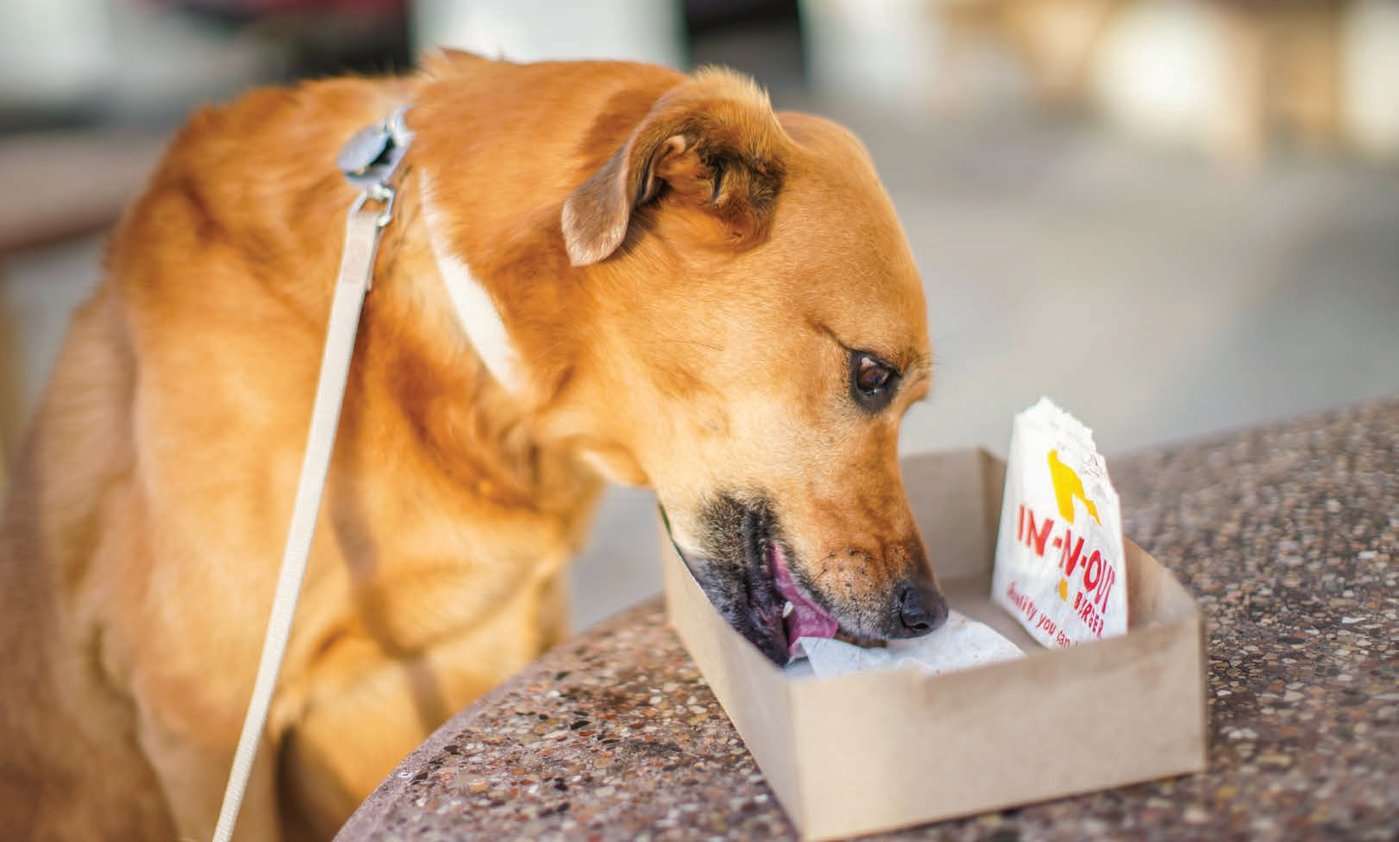 Long Beach dwellers and visitors love The Attic, a “creative Southern eatery plating an all-day menu in a circa-1920s Craftsman bungalow.” The vibe is very attractive in this joint, drawing in people from all over. Besides the usual suspects you’d expect to find on a dog menu (such as hamburger patties and chicken), The Attic also has some gourmet options for the fanciest of pups, including a whopping $28 steak! This indulgent option is explained in the company slogan: Because we love your dog as much as you do.

Located not far from Rosie’s Dog Beach, The Attic is a good option for a fun day trip to Long Beach. You’ll find them at 3441 E Broadway in Long Beach, open between the hours of 9 a.m. and 10 p.m.

If you ask tourists what they look forward to trying in California … many will say “In N’ Out burgers!” What was once exclusive to California remains a very popular stop for travelers to the West Coast. Made famous for the quality and addictive taste of their food, In N’ Out has been a beloved alternative to other fast food chains like McDonald’s for many years.

The chain is known for its various secret menus—“in-the-know” items for those privy to the information. Besides catering to its human patrons (even I will find any excuse to grab some “animal-style” fries after work!), In N’ Out has added two fun doggie options to their secret menu, the Pup Patty and the Flying Dutchman. The Pup Patty is a plain, salt-free burger patty, and the Flying Dutchman—originally intended for people but then moved to the doggy menu—is two beef patties and two slices of cheese.

In N’ Out has a multitude of locations throughout Southern California. 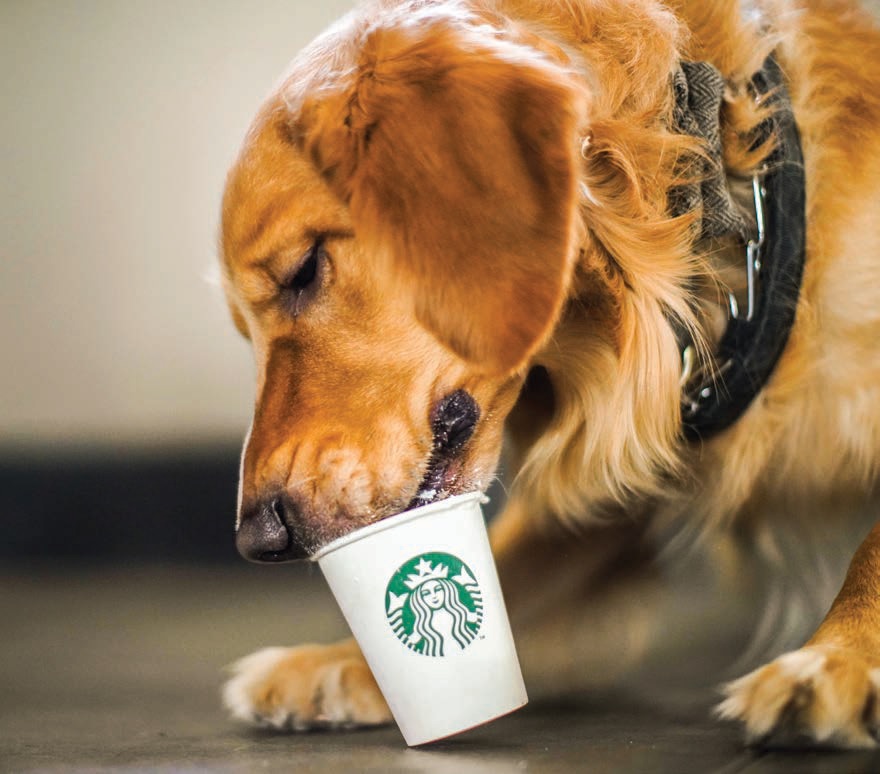 You don’t have to be the only one with a Starbucks addiction … your pup can indulge, too! The complimentary “Puppuccino” can be added to any Starbucks order, walk in or drive-thru, so you can share some Starbucks love with your dog. Just a small cup of simple whipped cream, the Puppuccino may keep Fido from trying to steal your straw or coffee as he happily licks up his treat. The coffee shop’s patios are pet-friendly, with nice umbrellas providing shade from the California sun.

Starbucks is located everywhere in Southern California, with many locations to choose from.

And for dessert … Sprinkles!

Having something sweet after dinner isn’t just a human tradition—now your dog can join in the fun with dog-safe treats from Sprinkles. The famous gourmet cupcake shop has added Pupcakes to their delicious menu. However, unlike their regular cupcakes, these dog-friendly versions are all sugar-free and topped with a yogurt “frosting.” Pupcakes are available daily in stores or can be special ordered on the company’s website. Sprinkles has—no pun intended—sprinkled a variety of shops all over Southern California, from Beverly Hills to Newport Beach. 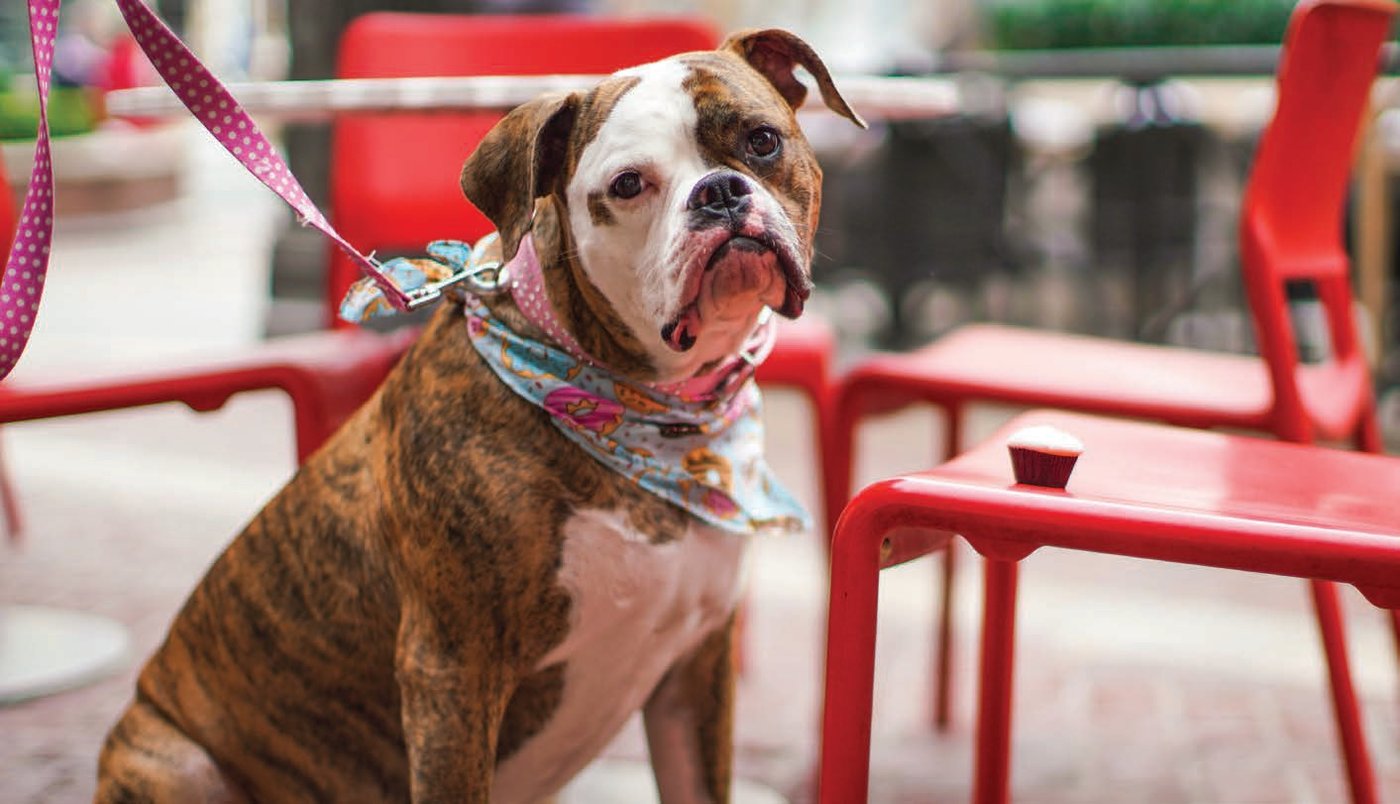 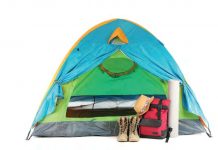 Camping With Your Dog 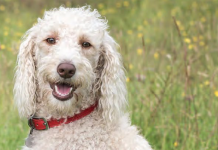 What You Should Know Before Buying a Doodle 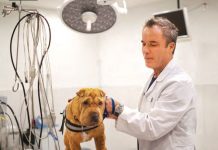 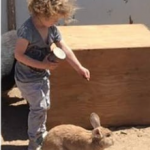